As I may have previously mentioned, my flying buddy Kelly has one of the big E-Flite Carbon-Z T-28s.  He has trouble wiping the smile off his face when he’s doing one of his usual low speed, flaps down, no bounce, land like a butterfly with sore feet touchdowns.  With the AS3X keeping things even more stable on breezy days, this thing is just smoooooooooooooooth.

We initially had some nose gear issues (replaced) plus we added some Multiconnex and there was an issue with the flap hinge cracking (the flap/wing surface is the hinge) which was rectified with some Blenderm style wound tape/hinge tape.  As I recall, when we applied the tape we also replaced the wing control linkages.  Everything about them is undersized for this big aircraft and some folks have had small issues… others not so small.

So after an early spring flight recently, I guess we shouldn’t have been surprised when the rudder linkage lost it’s center pin.  Funny thing is we bought the additional parts way back then but never installed them.  It’s funny because it wasn’t the elevator that quit working!!  Kelly was able to get the airplane safely back on the ground and I have just finished manufacturing the replacements for both the rudder and elevator. 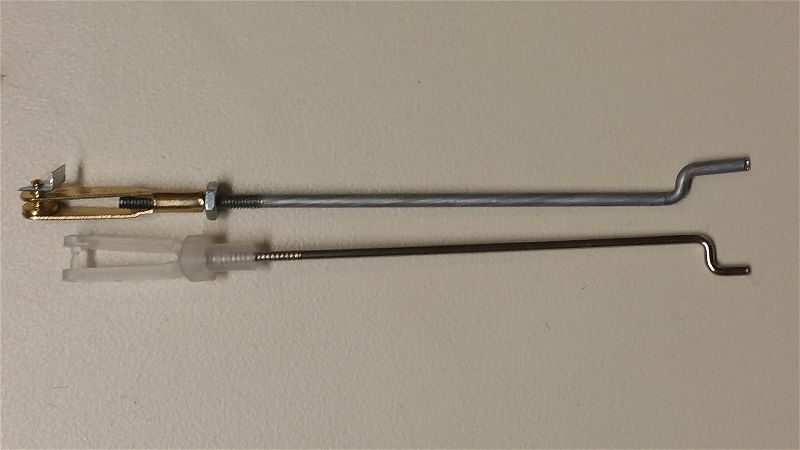 As you can see the original is just plain scrawny looking and our replacement is only 2-56 rod.  I consider even that small for this size plane but since they are so short (kudos for that E-Flite) 2-56 is sturdy enough I suppose.

The moral of the story however is if you are going to buy the big T-28, I would highly recommend you just go ahead and buy the hardware and replace all the flight linkages (6 short rods and your favorite clevises) before it even leaves the ground.  One less thing to worry about!

While you’re at it, order the Multiconnex (see that post here) and really make it easy on yourself!