Recently one of my flying buddies (George) lost one wing panel on his glider while sailing along over the cornfield adjacent to our field.  A couple of us who own multi-rotors with decent cameras were called upon to go on a little airplane hunting expedition.  Unfortunately, my only available batteries for the quad (a 350 QX) are a bit weak and I was concerned that with the expected distance to cover, I would have a hard time getting enough time over the search area to be effective.  Also, at that distance, the QX was going to look very small and I just don’t  have enough time flying it to be comfortable at that distance.  On the appointed day of the big search I arrived at the field and started planning some way to get out there and do a decent search.  Starting out at the very edge of the field or perhaps even staging in a bare spot somewhere further out were considered but in the end I decided to hold out a bit until my friend Martin arrived with his much more capable Yuneec Typhoon H.

In the meantime, I decided it might be fun to do a survey of the field with the Carbon Cub and GoPro Session.  I had a vague idea that if the aircraft was sitting high atop the corn stalks I might have a chance of getting a glimpse!  Even if we did see it in the video it seemed unlikely to do more than confirm a rudimentary vector to look on and perhaps a little more refined idea of how far off the field, but since it involved flying my cub… So shortly after I had the Session mounted and a fresh battery installed in the cub and away we go!

I angled the camera down 60 degrees or so and then started the video and took off over the corn.  I made three passes out and back along the line that the pilot reported his lost plane.  5 minutes later we fired up my laptop and started playing the video and carefully advancing a second or two at a time and looking on the video for anything that didn’t look like corn and especially anything white (which is the predominate color of the down airplane).

So here is a short clip of that flight… I highly recommend full screen for this one.

Did you spot it?  Here’s a single frame with a bit of help on what to look for. 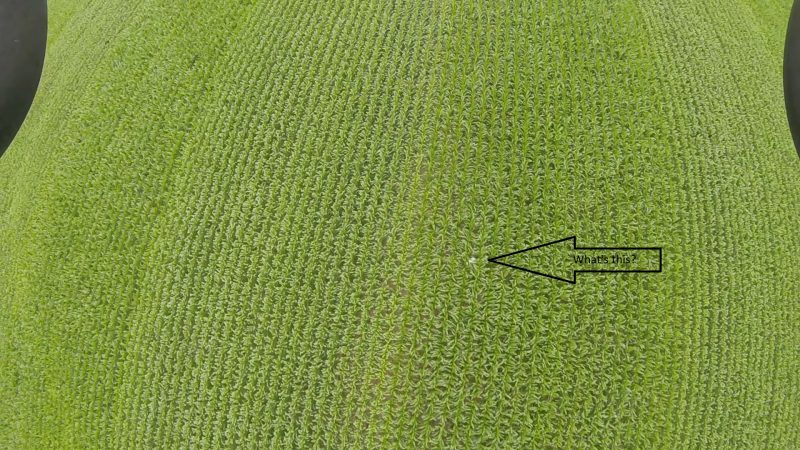 If you want to go back to the video around the 39 second mark you can probably pick it up for yourself now that you know what to look for.  Also notice that later in the video as I pass over the edge of the field you can get a line on where you would have to exit the field to find the downed craft!

In fact, after viewing the video a few times and following the row where we saw the plane out to the edge of the field and marking that spot as best we could… I walked out into the corn with one other person and we found it as soon as we got out far enough into the field.  In fact I walked to within 2 rows of corn on my first attempt and had no trouble finding it!

At this point I have no idea if we were just lucky or what.  It helps that the plane is mostly white… a military camo pattern would have been tough!!  I do know the video created by this camera is pretty amazingly detailed.  What your seeing here is very compressed version but even in this clip it is possible to spot that nice white spot in the corn!

For those who are interested, we were able to recover all but the one wing panel which we didn’t spend much time looking for after we realized the aircraft was pretty much destroyed in the wreck.  With what we had it what fairly obvious what happened that caused the wing to collapse.  After a stern talk with the ground crew (George mumbled to himself for a while) we were assured this particular error would not happen again!  🙂

The GoPro Hero 4 is an awesome little camera with all of the quality you expect from the folks at GoPro packed in a small little cube that can mount on a variety of RC planes in many ways.  It’s significantly lighter and smaller than the full size bodies with very similar quality video output.  It is NOT an FPV camera…  it is a great way to record the action and then view/edit and enjoy the awesome airborn views.  Here’s a link:

And if you need a great platform to carry it the carbon cub is hard to beat.  It can fly slow (almost walking speed with the flaps dropped) or move along briskly and carrying the camera has little to no affect on it’s flying characteristics.  Here’s a link for that as well.

The Carbon Z Cub isn’t perfect… it has some paint peeling issues, the main gear mount could be sturdier and the motor has been known to occasionally give up the ghost… I’ve documented all that in other posts here…  but I still recommend it because it just flys so darn well and it’s just a blast to fly.  Add in top notch support from Horizon and you have  pretty good airplane.

Anyway, it was fun and felt good to help a fellow flier get his airplane back.  Even staring at video of the corn passing underneath the plane was interesting.  Who doesn’t like a good video from an “elevated” perspective.  Hope your search patterns yield equally good results.  I’ll try to post some more soon on other interesting projects and happenings at the field.  Until then, happy 4th of July!  Or as we always called it at my house… “Happy dad’s birthday!”