When is the 300th flight a maiden?  Telemaster 40 returns to flight once more!

Since the last update about 6 months ago, I finished up the covering job on the Telemaster and got all the servos and radio gear back in the old Telemaster 40.  The usual challenges of hindging, recovering and getting control horns back in place kept me avoiding these somewhat onerous tasks but once I got past some of that and got close enough to see the finish line I quickly finished her up and it was time to put her back in the air.

Here it is after the final decals were applied, screws tightened and radio system installed. 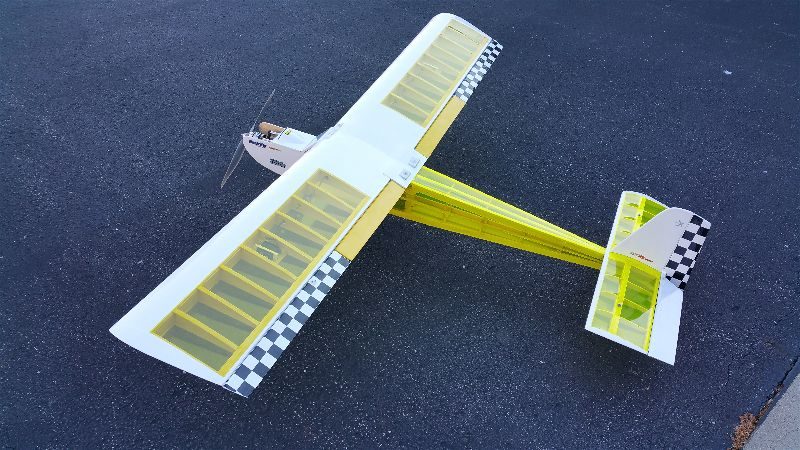 One of the common tasks I ran into when I went to reinstall the servos was to rerun the servo wires out into the wing bays.  Of course I should have run those when I had the covering off but of course that thought didn’t occur to me.  First, I applied the servo clips (how can you attach extensions to servo wires without those?) to insure the wires stay together. 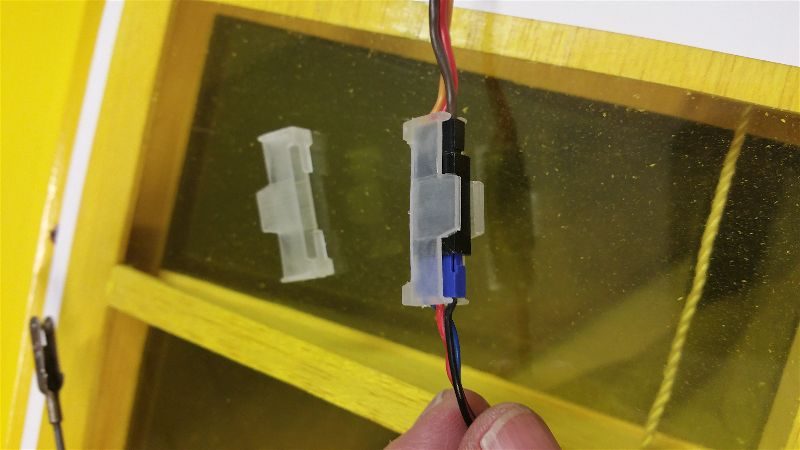 Then I grabbed my custom servo wire guiding tool (patent pending) and thread the wires back in there…  This tool is quite complicated (a string and a nut) and customizable by picking out a longer string or a smaller or larger nut!  Here it is in action. 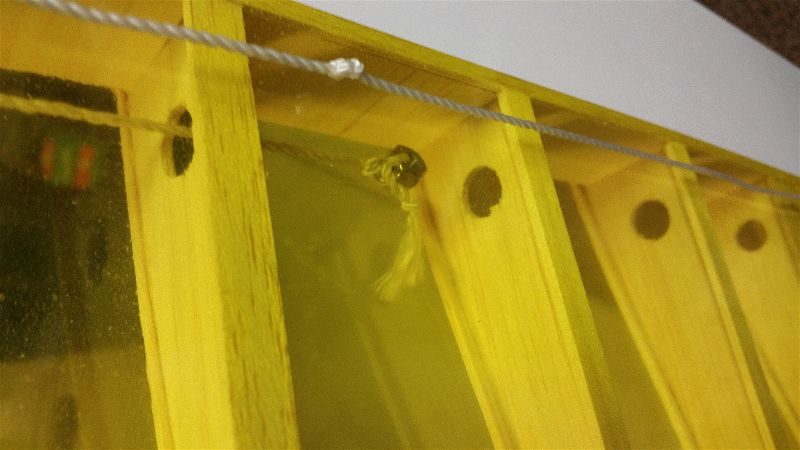 Tie your servo lead to the end of the string, fish the nut down through the wing and pull the wire though… presto!

With the 3700 6S on board the plane now weighs approximately 7lbs.  Figuring the original 5.5lb weight (approximately) and adding the on board fuel weight (maybe 3/4 of a lb) means it has gained maybe 3/4 of a lb flying weight.  This is a bit more than I wanted but this plane flew so light that I think an extra couple pounds would leave a flyable airplane but I admit I would like to keep it as light as possible.  I fully expect the power system to be able to handle up to about a 9lb airplane to at least “hover” if not “pull straight out of hover” levels so it may be that the extra weight won’t cause a problem.

So, with all that in mind, off to the field to meet up with several of my flying buddies and see how it goes.  This is the third covering scheme on this aircraft.  It started off base white with some red and green highlights and then after I needed to do some maintenance that caused much of the red and green to exit, I decided over a white bread sandwich that red, yellow and blue polka dots were the answer.  Now along with the conversion to electric power, I went to a combination of transparent yellow, white and checkerboard black/white.  While all had their appeal, the new scheme is my favorite.

The first flight session went remarkably well.  The new hatch gives ample access to the battery area and there is plenty of room to shift the battery to achieve any desired balance point.  In addition it appears to allow for plenty of air flow and the magnet (which I had been concerned about) is keeping the hatch in place nicely.  After the last flight of the first day, I noticed the engine had started to move.  Upon further investigation I realized just how loose it was!  Here’s a shot showing some of the issue. 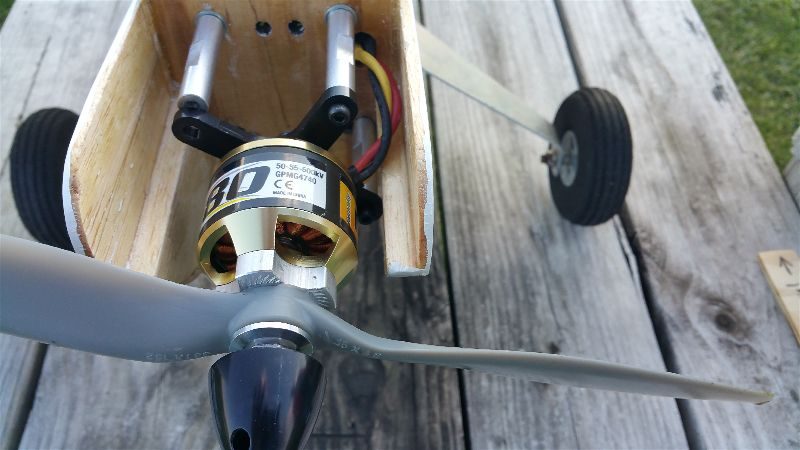 Not one of the mounts is still tight!  Two of the back screws are completely lo0se inside the body and one of the front mount screws is missing!  Yikes!  In the back of my head, as I looked it over I remembered thinking I would go back later and apply thread locker and re-tighten these mount screws.  Such is the danger of spreading out a job like this over close to a year span.  Later never quite arrived… until after these first few flights.  I got lucky that no damage resulted.

Once home, I pulled all the bolts and added some thread lock before re-tightening and she was ready to go again.  Next trip proved that the airplane still flies as well as ever.  The added weight doesn’t seem to hurt, maybe even helping in somewhat breezy conditions.  It seems to fly well with anything from my smallest to largest 6S batteries, from 3200 to 4500mah.  The 32/3300 packs give me a safe 5 minute or more flight with the 4500 netting an easy 15 minute flight.  Short takeoffs with flaps are easily doable with slow lazy flight being the real forte of this old but dependable platform.  The plane will pull straight up indefinitely with any of the packs as well so float flying, glider tow and carrying my RC jumper all seem doable.  This is a great start.

The 300th flight… or just the latest maiden flight.  Anyway you look at it, the Telemaster continues to perform well.  When I opened that box of sticks ~15 years ago… who would have guessed!