Today my flying buddy Gary stopped by to give me a taste of his latest acquisition… the Hangar 9 F4U-1D 60cc ARF.  Gary has only been flying a couple years, but one plane has always caught his eye more than any other… the Vought F4U Corsair.  The distinctive WWII war bird is instantly recognizable to most and a favorite to many.

Gary stopped by today with just a few of the many parts and pieces required to get this big beautiful bird in the air.  First and foremost is the power plant.  Gary had the opportunity to see this engine at the Horizon booth when we attended and I think that pretty much sealed the deal.

The Evolution 77cc 7 cylinder glow 4 stroke is a piece of art.  It comes complete with a glow wiring harness and integrated mount.  But if you thought your wallet was done taking a beating when you bought the engine… probably not so much.  Most will want the collector ring (at additional cost of course) and an on board glow system as suggested in the engine manual (now that wallet can take a deserved short break).   Here are a couple shots from when we unpacked it today in my shop.

Here’s the money shot… This thing is just B-E-A-Utiful! 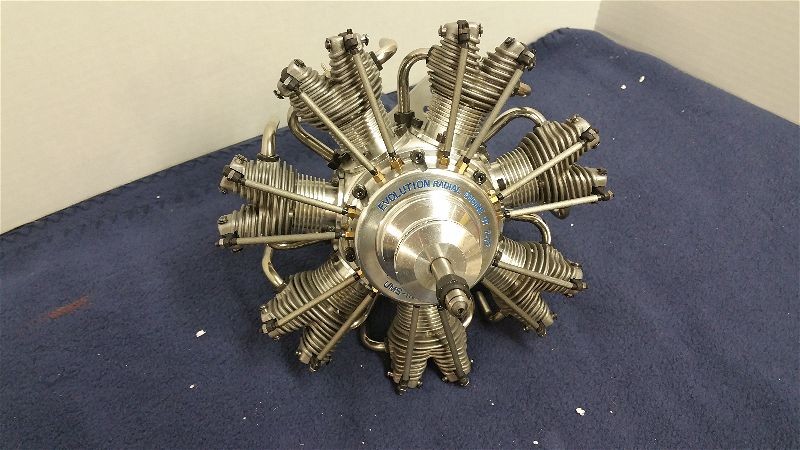 Even the mount is beautiful in an elegantly functional way.  Having the choke and throttle linkage thought out a bit for you is a nice touch as well. 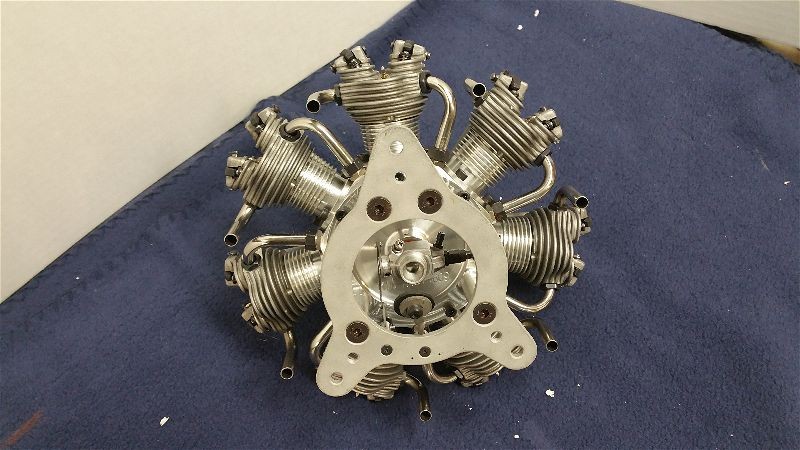 There are some interesting little notes in the manual about oiling the push rods before each day of flying, adjusting valve lash when needed and inserting after run oil after every flying session by pulling a push rod and cam follower to add after run oil…  That all sounds pretty reasonable until you remember this thing will be hiding under a cowl, possibly with air baffling around the cylinders (again, a recommendation from Evolution) so maintenance is going to be a chore that no one with this kind of money invested is likely to be skipping I guess!  Ah, large fuel powered war birds…  They do enjoy being lovingly maintained!  What have you gotten yourself into Gary?  Of course it will all be worth it when we here the dulcimer tones that will be issuing from the exhaust!!  Oh, and watch out for hydro-locks in those bottom 2 cylinders!  I wonder if storage of the airplane “nose up” would minimize that possibility??

There are also some interesting recommendations on fuel mixes…  I don’t recall seeing 0% nitro with 10% oil on the shelf at the local hobby shop (for break in) nor 5/7 for later use…  Hmmm…  Better start looking for some pure methanol so we can mix up some custom fuel!!  This is where the modeling part comes in I guess.  I ‘m actually looking forward to seeing Gary in his “mad chemist” outfit with a bubbling cauldron… 🙂

All that aside, I really think it will be worth it all when that big bird lifts off.  This engine is going to demand some respect and loving attention for sure though.

Also in hand when Gary visited were his main retracts.  You have to admire the engineering behind these as well.  Not only are you raising and lowering the wheels whilst providing some nicely spring loaded struts… but they have to rotate 90 degrees as well!!  These are Robart units with the electric actuator so I expect smooth action and simple setup… at least for retracts! 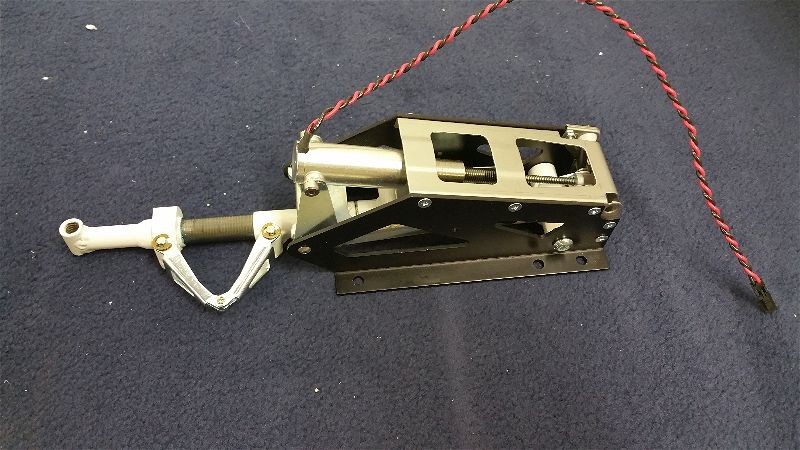 We didn’t get around to plugging together a receiver and the control board so we could cycle these… I’m looking forward to that as well.

Gary promised pictures and some commentary as he gets started  building so I’ll try to post occasionally on how it is going.  Especially on anything interesting, troublesome or particularly cool.  We are already talking about ways to avoid the 2lbs of nose weight they claim we will need!  I hate lead in an airplane.