Let me just start out stating… when you get to the part of the manual where Aeroworks tells you to balance the BD-5B… and even tells you definitively “Do not skip this step! ”  I highly recommend you just move on and leave that ’till after the first flight.  This way you will have a much more exciting first flight and it certainly is more likely that you will be able to more easily transport the aircraft back home… I doubt you’ll need a very big garbage bag to carry what’s left.  Unless you really want to fly it twice without repairs?  I guess that’s one way to go, but if you are a thrill seeker not-balancing is a great way to go!  Ask me how I know.

Ok, so maybe you should balance the plane…  I opted out of that part so let me tell you a bit about my maiden flight.

It was a nice Sunday morning with the temperature approaching 60 degrees at noon.  The wind was a bit brisk for an airplane this small and light (8-12mph) but it was pretty close to being down the runway so not terrible.  After loading up and securing a 3S 2200, I dutifully checked all control surfaces which responded appropriately.  Thinking back I recalled that I had checked the throws against the recommended and dialing in my usual (fairly aggressive) exponential settings.  I even made sure I was in low rates as I expected that at speed this little ship would probably be a bit more sensitive that most that I fly.  All looked good so after a quick taxi out on our Geo-textile runway I lined up into the wind and started rolling.

It took a bit longer to rotate and a bit more elevator too (note to self… maybe check to make sure the nose isn’t pointed down slightly??) but then it jumped into the sky and with a little down elevator it… dove for the ground!!  Yikes, pull back up and it’s climbing like crazy again… After letting it gain some altitude it became a constant battle to maintain altitude and herd the plane around while constantly trying to find a mix of throttle, elevator and attitude that would smooth out the roller coaster ride.  After trying several combinations, and barely recovering from several stalls and one trip to the far reaches of my visual range, I realized it was time to admit that there was nothing that was going to keep this plane flying level and try to figure out a way to get it back down in one piece… or at least a minimum number!  Having used every trick that 20 years of RC flying experience has taught me to get to this point… it was time to just line it up, react and hope for the best.

On approach now and trying to outguess the roller coaster ride.  Keep in some throttle to avoid any stalls until about 3 feet off the ground and here comes the seemingly inevitable plunge…  A last second drop of throttle and simultaneous full up elevator just as it hits the grass with only a little bit of nose first down angle.  Holding my breath but it looks like nothing too serious.  The structure is apparently intact with only the nose gear pointing back a bit more than when it left the ground.  All in all, I wasn’t unhappy with the end result.  Just with the mistake that made this such a fight!

Here, you can tell where the wheel contacted the bottom of the body! 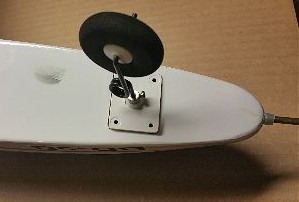 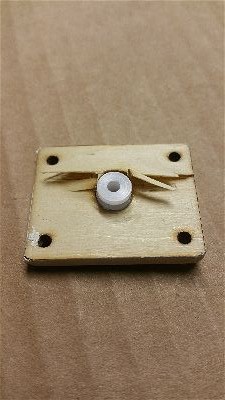 You may also be able to see that there is a groove that looks like there may have been a retainer of some sort but if it was ever there… it’s long gone now.  So I created one using a washer and after re-gluing and clamping the wood to restore it to perhaps stronger than original, here is the result. 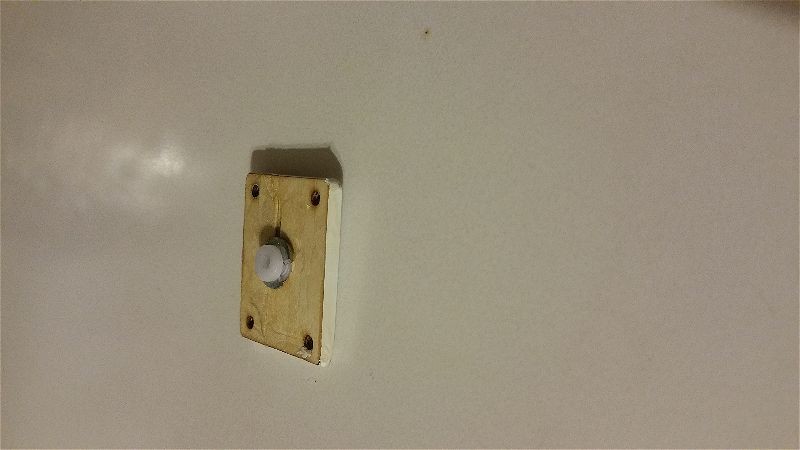 When I reinstalled it, it seemed as good as new.

Finally, I put the airplane with battery installed up on the stand and not at all surprisingly it took 3 ounces of extra weight were the battery sits… which is far forward… to get it to balance as recommended.  No wonder it was such a handful!  That equates to about an inch behind the recommended balance point.  So the lesson, in case I had any remaining doubts, is “Always double check the balance!“.

To correct this, I can either throw some lead in there or drop in some extra milliamps…  Normally, I would go for more battery capacity but I have no use for 2500-3000 3S batteries so I will likely just secure some lead and give it another try.  At this point I am lucky to have a plane to fly a second time so I don’t have much to lose.  I used all the skill I had and then got just plain lucky to get it down in one piece.  Looking forward to a much less frantic flight!