I already posted a bit here about this airplane with the focus on the retracts I used.  You can see that post here.  This post will focus more on the Electric conversion process and the results of that.  Note that I never flew the plane with the DLE 20 that was on it when I acquired it so can’t compare to that… I can only tell you about my conversion process and the results I got.

I have a flying buddy that has been in and out of the hobby for the past several years named Martin.  Martin called me after not having heard from him for a bit (maybe a year or more) and reminded me of a P47 that we had worked together to get ready to fly.  It was a 60-90 size Top Flite ARF and we had gotten it pretty close to flyable with a DLE 20 installed, servos and linkage all installed and even radio gear all in place.  For whatever reason it had just never made it into the sky.

Martin asked if I was interested in the airplane.  If you look back at my previous posts you will see that I already own a nice FMS 1500mm P47 that flies very well on 6S.  While I have a particular affinity for the P47 (my grandfather helped build them in Evansville, Indiana during the war) I was hesitant because this airplane is only slightly larger than the foamy I have and I wasn’t sure I really needed two P47s in a very similar size… plus I’d have to consider whether to convert it which might be quite a job.  Add in that I really didn’t have any room in the RC budget at that moment for another airplane and I explained to Martin that I really couldn’t give him nearly what it was worth.  Martin however, explained that he simply wanted to get out of the larger airplanes like this and since I had spent so much time working with him on it, he was simply offering to give it to me!  I offered to at least pay something but Martin insisted that if I had an interest that it was mine.  He even offered to deliver to the field in a couple days when I was planning to fly.  What could I say?  Of course I accepted. 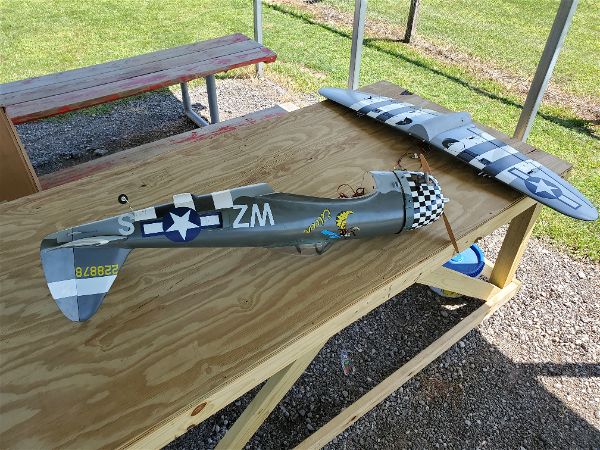 After a lite cleaning and a thorough inspection I made a couple decisions on things I wanted to change/upgrade or just tinker with a bit before I’d fly it.  A couple were easy decisions.

First, I wanted to order a new set of graphics as the decals the came with the plane I knew would never last.  In my experience if you want good looking and long lasting graphics with few/no wrinkles or bubbles you buy vinyl… typically from Callie Graphics.  Callie is inexpensive, willing to work with you on any request and provides a great product.  I had a set of markings on a 50cc size Mustang for 3 or 4 seasons.  Many days the plane sat out in the sun all day and the vinyl never bubbled or faded.  I even had to peel the stars and bars from the wing and reapply them when I crashed the bird and bought a new wing.  They still looked like new when I sold the plane a few years ago.

Second, I knew I wanted to replace the landing gear, which I’ve already discussed.

The third issue was much more of a question and it took a couple weeks to come to a conclusion.  What to use for power?  Obviously leaving the DLE 20 in place would have been easy.  I knew the history of the engine and that it ran well before it came to be installed in this bird and it would certainly be an adequate power plant.  However, every other plane I currently own is electric and I had what I thought might be an excellent motor for the purpose.  In fact I had been looking for something to put the motor in ever since I acquired it.

Thus began several days of reading and research.  First I looked on various discussion groups about the airplane and what others had done.  90% plus had run gas engines… a few 2 stroke glow and a few 4 strokes rounded out the vast majority.  What intrigued was the 2 guys who mentioned they were running electrics.  Eureka!  Until I realized that there was just no easy place to put a battery hatch into the P47… at least not that I wanted to tackle.  the plane is pretty much all curves and being an ARF, access is limited unless you want to recover and rebuild extensively.  This didn’t seem promising.

While I mulled on that, I started to look into the electric motor I had and tried to figure out if it would be enough power for the P47.  The motor is a Hacker A60-5S-V2 and while the Hacker site has a fair amount of info there was only a bit of corroborating information that I could find.   It looked like it might be just a bit on the small side if you believed the Hacker site information.  Encouragingly, the actual users reported fairly uniformly that they were running this motor (and most Hackers it seemed) at the maximum ratings and even significantly above with no problem at all.  I picked up this motor at a swap meet NIB from a trusted source at about half the price of a new one… I could never bring myself to pay the full price when there were a lot of quality motors available at much lower prices… Could the Hackers really be that much better??  This was my chance to find out, right?

With 90% of my previous electric setups I was always able to find a dozen examples of similar planes and power plants to compare to.  In this case, only a couple examples were out there… so lacking enough information to confidently pick a proper propeller and speed controller I decided to revisit an old standby… eCalc.  I won’t go into great details, but based on what it showed me I decided that the Hacker could “hack it” on the P47.   I might need to use 8S batteries (which I have none of) and the flights might be a bit shorter than I’d ideally like (6-7 minutes predicted) but I really wanted to try out this motor.

So that issue aside I was back to the problem of a battery hatch…  I went back to all the groups and started reading again and after several hours of reading and making the firm decision to just keep the DLE-20 in place, I read a few more posts and one of the guys who was running electric power mentioned the hidden hatch… WHAT!?  I read on for hours and found nothing but then I saw reference that the hatch existed on this entire series of warbirds??  It was only 1AM by this point and I had to get up at least by 6 but this was important, right?  As I continued my research, I found a description of where the hatch was located and how to open it up on the sister warbird, the Mustang.  A quick trip to the shop and I confirmed the hatch did actually exist on my P47 as well… sort of… and the decision was made.  I had to try.