I recently came into possession of a Top Flite 60-90 size P47 ARF.  It had a DLE 20 on it and was nearly in a ready to fly state and had never been in the air, but of course I couldn’t just leave it alone.  I have zero non-electric aircraft in my fleet at the moment and it so happened I had the perfect electric motor sitting in the box… so of course I converted it immediately!  I also knew that one of my flying buddies was in the market for the exact gas engine that was installed in the plane.  Thus it began.

I won’t go into detail here about the whole conversion.  For more details on that there are several posts starting with this one: P47 Conversion.  Suffice it to say that just when I thought it was fully ready to fly, now under electric power, I ran into a problem with the landing gear.

The landing gear that came with the plane was a mechanical retract system with “plastic” mechanisms and it had a lot of slop in the system.  Even when fully locked up or down the gear could rotate… perhaps 3-5 degrees.  The result was the wheels would not stay tucked up in the wheel wells, nor did they maintain the proper angle when down and “locked”.  I first realized how big a problem this was likely to be when I taxied the plane around in my driveway.  After rolling 5-10 feet it was like applying the brakes.  You could see the wheels tilt inward at the pavement and twist inward so that they started scrubbing against the concrete.  It was obvious this was not going to work.  If I got off the ground at all, surely any landing with the wheels deployed was going to result in a flip over.  With an 11lb plane, a flip over was likely to result in some consequential damage.

Then the question became, what to do?  I disassembled the existing retracts and looked at any possibility for improving/repairing what was there but I could not come up with an adequate plan.  I could also go to one of two “big names” and get retracts for the airplane… whether they be mechanical, electric or air driven.  I was concerned the mechanical systems from the big names might put me right back where I was (at worst) or work OK, but cost me $150 at best… and of course their electric sets, which I have used before are very pricey.  I could easily have spent $300 or more on those.  I had not intended to spend much money to get this airplane flying but there was no fixed gear option so I had to do something.  I really wanted to go electric but the cost…

Fortunately I read on some forums how guys had put some E-Flite electric retracts in the plane and claimed they worked well.  I take anything I read on the forums with a grain of salt.  I’m convinced most will not admit that they are unhappy with something they spent a lot of money on and are now stuck with so I wasn’t sure.  I tried to read the specs/look at dimensions etc… but unfortunately this is a brand from Horizon Hobby and their web site is simply pathetic.  Not only is their search engine on the site total crap, but they typically provide very limited information on their products on the site and these were no exception.  No indication of the build material, no dimensions, no complete description or listing of what parts come in the box, etc…but having few other options coupled with some good reviews in the discussion threads I was reading combined with an affordable price convinced me to take the plunge.

Immediately on picking them up from my local hobby store I was cautiously impressed.  These thing looked like they were machined from aluminum and what’s in the box is very complete, down to the necessary allen wrenches provide (3) to fit all the set screws! 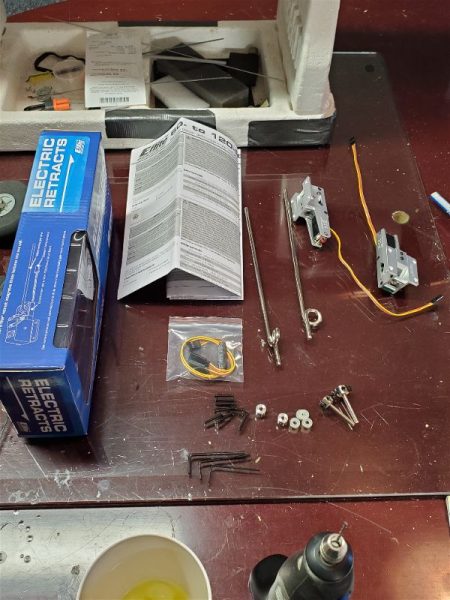 And here is a closer shot or two of the mechanism itself. 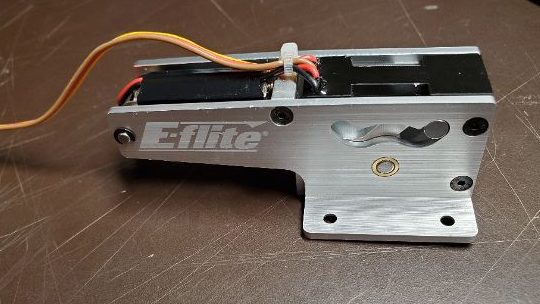 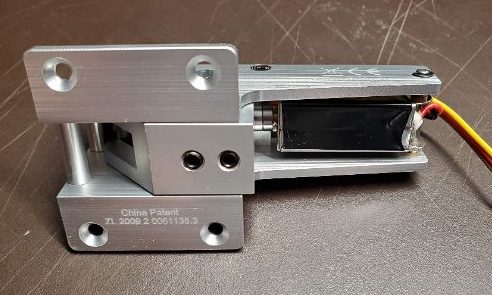 To me, these are things of beauty, and I only paid about $155 for the pair through my local hobby shop, including tax!

It took a little work to get them into the bird… nothing terrible and none of it reflecting badly on the retracts.  Since installing these I have made I think 10 flights.  I fly off of grass and Geotex runway and there has been no rain in the last 10 days before my last flights yesterday so the ground is hard and there are some bumps out there as well and so far these things have worked flawlessly.  Not one time have I had an issue with either retract failing to move when commanded, coming up short of full motion, twisting wheels, nose overs… etc…  From a functionality perspective, I have nothing but high praise for the E-Flite retracts.

If your looking at these and trying to decide if they are worth the money, I’d say yes.  Further if you are trying to figure out how well built they are, I would say they are top notch.  I’ve seen nothing to indicate that this is anything but top quality throughout.  Finally, of course the information you need to see if these will fit is not to be found.  So here are some measurements for you in case you need them.

I’m using English/US measurements and I’m sure these were made using metric measurements so these are approximate.

Across the mounting tabs the retracts are 1.75″ wide and 1.5″ long.  Each tab is 15/32″ (just under a half inch) across the outer face.  The depth of the units measured from the back of the mounting to the bottom is 1 and a 16th and the part that extends down into the wing is about 13/16ths wide.  The mounting tab itself is approximately 3/16ths thick.  The units themselves are approximately 3.25″ long (measuring the metal “frame”) which includes the motor mount etc…  The strut is 5mm in diameter which allowed me to use my existing strut with just a minor trim at the top so that the “curly q” shock absorber bend in the struts lined up with the cutout in the wing.

Hopefully some of that will be useful to others out there.  Wouldn’t a dimensional drawing from E-Flite be nice!!  Still the units are top quality and reasonably priced!  If your in the market, I don’t think you’ll be unhappy with these.