For those of you who are at least somewhat seasonal flyers like I am, you may recognize the dangers of the first few trips to the RC field after being mostly away from flying for some weeks or months.  There are new planes to fly, old problems with existing planes that you promised yourself you’d fix over the winter and of course just the early season issues caused by being out of the groove.

I recently had one of those “early season” moments (at least that’s what I’m going to blame it on) where I did something stupid because I didn’t have my head in the game when it mattered.  Here’s what I believe occurred.

My first mistake was in not being prepared.  Usually, when I get to the field I have already charged up flight packs and my radio, insured I have all the right bolts, tubes and whatever for the planes I intend to fly, etc… but this time I just didn’t get the proper time to prep so I arrived at the field with the two batteries I had for the plane I most wanted to fly in storage mode.  So I pulled out the generator, hooked up my power supplies, grabbed the high power charger and popped the two 5S batteries on the parallel board to charge.  Of course I did this all in a hurry and without putting my glasses on.

That’s when the fun began.  As I was starting to program my charger, the smell of burning plastic and some smoke started to issue from the area of the batteries!  I quickly yanked the battery connections lose and tossed the batteries into an open grassy area away from any nearby cars and my trailer. 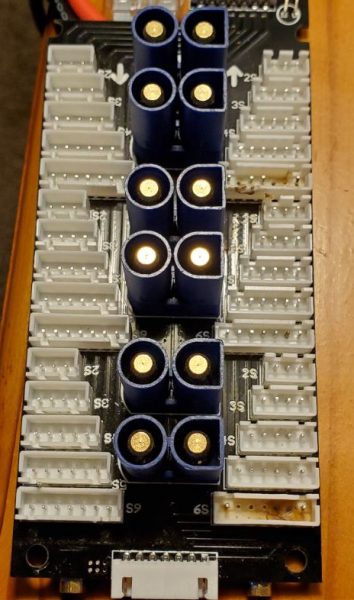 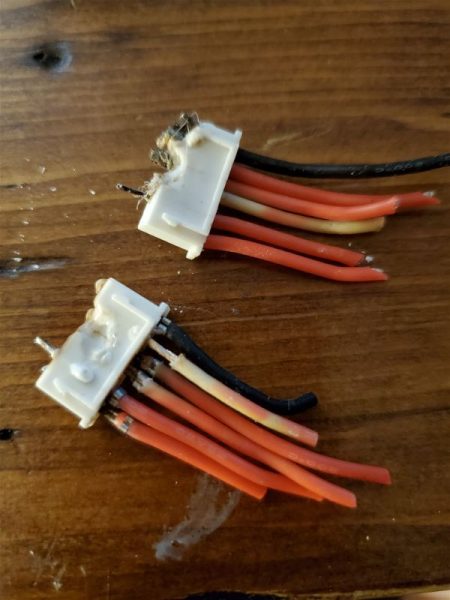 I later noticed (as you may have already) that the melted connectors on the board were the 6S connectors??? So somehow I had gotten the two 5S XH balance leads at least partially seated in the 6S connectors.  And I had done so consistently!!

I’m guessing that I managed to connect the ground part of the balance lead to the first positive wire on one or both, essentially grounding cell 1’s positive wire!  In any case whatever I did caused a enough current to flow through those pins so as to melt the plastic around them and de-solder some of them from the parallel board!

While I was at the field I decided to cut the balance plugs (now mangled beyond use anyway) from the batteries as there were exposed pins etc… and I didn’t want to transport the batteries with any chance that a short might occur and cause another event in my vehicle or trailer!  I cut them off cleanly with minimal wire left exposed, one at a time, and staggered nicely so they couldn’t easily touch.  Also I was there for 3 or 4 hours after this occurred and the batteries weren’t swelling, getting hot or showing any other signs of distress so it seemed they might be salvageable and I wanted to examine them later on my bench.

The next day at home I started going through and measuring the voltage and labeling each wire to identify the individual cells.  All measured in the vicinity of a storage charge level and by measuring each relative to ground I was able to figure out and mark the cell order.  Here’s my test setup with a battery in the midst of the labeling process.  I have the negative test lead clamped into the ground on the main load connection and that connection rubber banded down to keep it safely away from all the positive wires. 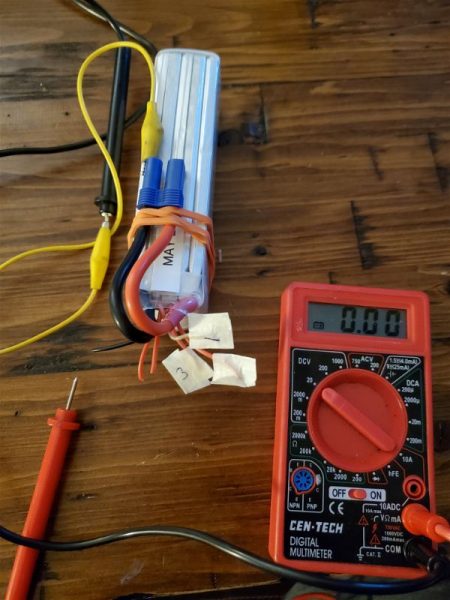 I found a place to purchase 5S extension leads, so as soon as I get those I will attempt to safely put a balance plug back on the battery.  Once I do that I can further test and cycle to insure the batteries are still good.  I’ll post again or add to this post when I finish that process to tell you the results.

In the meantime I’m wondering if a “safer” balance board would be a worthwhile investment?  Some have not only a fuse for the main connector (which mine does also) but protective self-reset able “polyfuses” on the balance connectors.  Right now those sound like a wise investment and I encourage you to consider that option if you start parallel charging.

Don’t get me wrong.  I don’t think that parallel charging is unsafe… just that it requires a bit of caution and attention to keep it safe!