As I got more involved with RC aircraft, I always wanted a twin engine aircraft… and in my book the only twin worth considering was the P-38 lightning.  I have always thought the P-38 was a gorgeous aircraft and I kept an eye out for a chance to purchase a nice example but there were a few issues with acquiring one.  Remember this was before the advent of high quality ARFs and certainly before low cost, high quality electric power systems became the norm so the only P-38s available were very large, very heavy gas powered craft with equally impressive price tags!  Smaller glow powered versions were few and far between partly because keeping two glow engines in sync has always been a challenge and I would assume partly due to the difficulty of designing an building an aircraft as structurally complicated as the Lightning.

For instance, designing and building a light and rigid boom assembly with the landing gear location limiting your options for structural integrity in the wheel well area would certainly be challenging.  And of course everything about the craft is round and tapered, making for additional challenges for the builder… especially if you wanted to create something close to the scale outline.  Lots of beautiful curves means difficult to form from Balsa, glue and covering.

Lucky for me, the days of stronger foam, carbon fiber reinforcement and inexpensive electric power systems is upon us!  Enter the Flightline RC P-38L available through Motion RC.  Since these first became available a few months ago, my buddy Kelly and I have both been watching the various on line forums for reports of both build quality and the air handling of this latest iteration of an RC version of the Lightning.  Reports seemed mostly positive so after he hinted for several months that we both should have one I recently texted Kelly with the phrase “I want the green one!”  It only took about 3 days after that before Kelly arrived at my shop with two fairly large boxes.  Here are a couple shots of the unboxing: 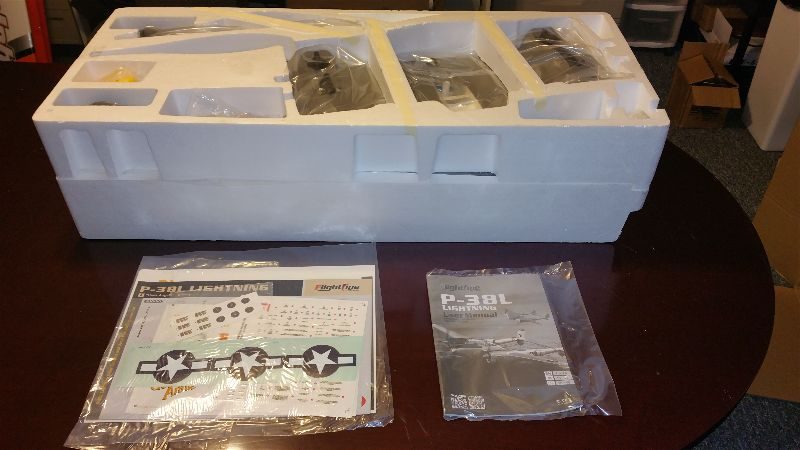 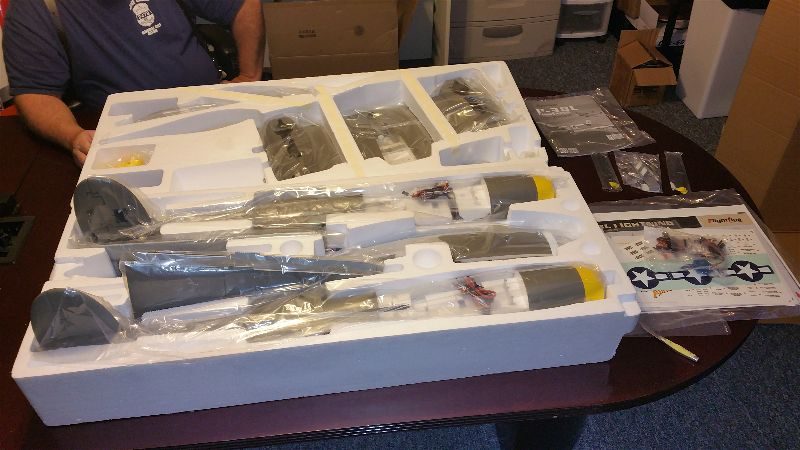 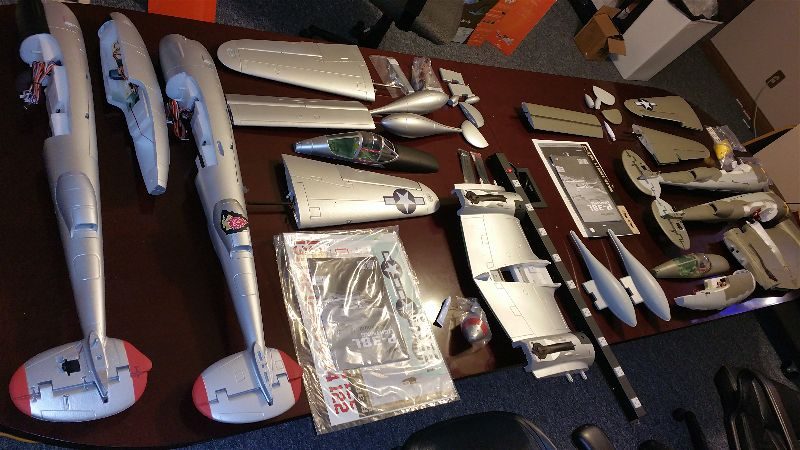 At first impression I can say that these things are pretty impressive.  For $349, you are getting what seems to be a fairly strong airframe with two motors, two speed controllers, 9 servos, 3 bladed props, spinners, decals for 4 different aircraft, servo linkages, etc…  Basically it looks like EVERYTHING you need to fly except batteries and a receiver.  Yes, as widely reported, you can certainly see the foam cell structure through the paint.  This is especially true of the silver model as it has a higher gloss/luster to it.  Scale aficionados will doubtless be displeased but the overall lines are very nice and I am not trying to win any scale contests here so my initial impression is that they look pretty good.

I’ll post more as I get to assembling.  I’ve already ordered the upgraded landing struts (they seem like deal for $40 for the set!) and my receiver is on order as well.  I expect to be posting again soon as I don’t think I can stand to let these lay around here for very long.  Christmas just came a month or so early!