During his recent trip to the Weak Signals show in Toledo, my flying buddy Steve made an “impulse buy” from the good folks at Falcon Hobby Supply and came home with the Taft Hobby DO-27 in Red and White. 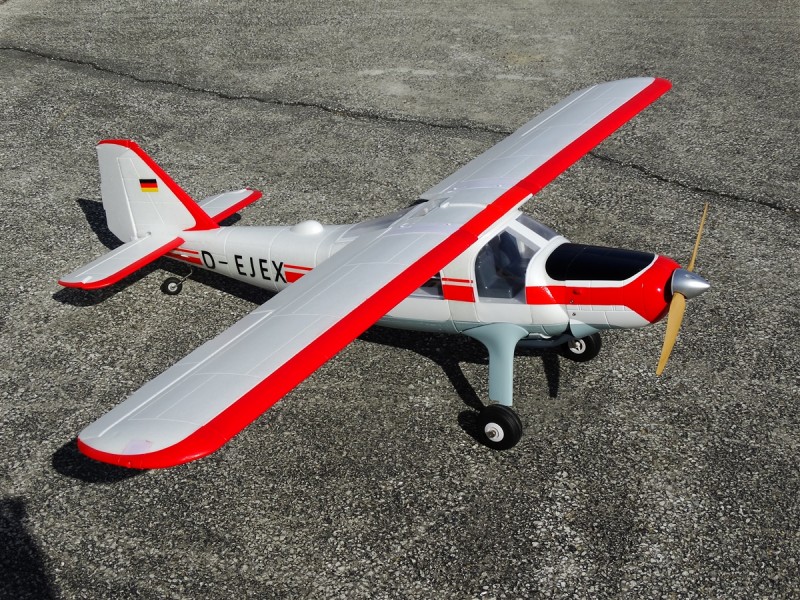 The purchase started out with a bit of  misstep when the folks working the booth there assured Steve that the plane would accept the 6S LiPos that he had on hand.  This is not the case!  The DO-27 is setup for 4S use and I very much doubt the speed controller or motor would last long if a 6S was installed!  With no 4S batteries in his inventory, Steve was considering returning the aircraft but the folks at Falcon stepped up and offered to send a free battery at no charge.  Shortly thereafter Steve has a 45C Pulse Ultra battery in hand and is looking forward to flying his new airplane.

Today, Steve brought the DO-27 over and we started unpacking and assembling.  Visually the airplane is striking with a nice paint scheme, quite a bit of scale detail and a very distinctive look.  Packaging seemed to be excellent with no damage noted and everything held tightly in place.  The model is also very complete with everything needed including a nice wood prop, spinner, nice looking wheels, etc…  Assembly is very simple with only a few steps to complete but during the process we did note a couple of issues.  Two were especially troublesome.

First, the front wing tube in the port side was impossible to install.  It went in an inch or so and then became very stubborn.  After forcing it a bit further it just continued to get more difficult to slide in.  Visual inspection seemed to indicate the tube was misaligned with the plastic wing root as a lip can be seen on one side.  With no way to move the tube (it seems to be quite securely installed) we tried using a drill bit to open up the entry to the tube and eventually managed to get the tube in place but it is very difficult to install and I think another call to Falcon is imminent!

Secondly, when Steve attempted to connect the linkage to the tail surfaces we quickly realized one was far to short and the other far to long!  It was quickly decided that the linkages were simply swapped at the factory so we traded them out and things looked a bit more promising until we realized that both were now to long…  a bit more head scratching and we realized that if we physically reversed the servos, essentially moving the output shaft forward a bit, we might have something that would work.  With that done, we got to a workable linkage layout and all seems well.

Another minor issue was clearance between the landing gear blocks and the foam hatch that screws on over it.  Once the straps were added to hold the landing gear in place, the belly hatch was held slightly away from the body of the plane.  Some simple trimming in the area took care of the problem.

We still have high hopes that solutions to all the issues will be found and Steve will get to actually fly the bird soon.  With any luck it will fly as good as it looks and we can leave the issues behind.  More to come….