If you read the first look post on this plane you will recall that we ran into problems trying to install the first wing set due to (apparently) a misaligned tube in one wing.  Once again the folks at Falcon took good care of their customer and shipped out a new wing set and tubes.  The new set slid right into place but at this point we noted another issue. 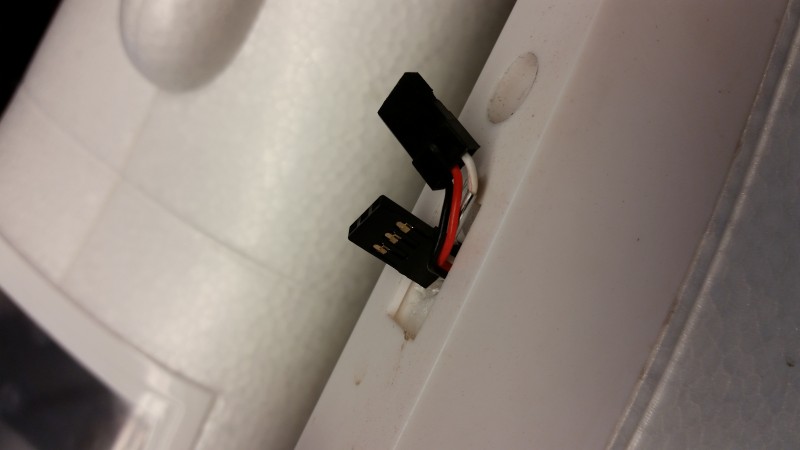 As you can see one of the servo leads in the wing is so short that it is very difficult to plug in at all when you are assembling the aircraft.  You don’t have a lot of wire coming out of the wing root either, though it is adequate.  The problem is you can’t hold onto this servo lead and apply any pressure to assemble it…  Forceps are NOT optional!  This is an annoyance, but not a showstopper.

Finally, the last complaint I have about the Taft DO-27 is the hinging of the control surfaces.  The folks at Taft obviously know these things are a bit fragile as they include a bag of hinge points to install in case the molded in hinging fails.  We added some wound tape in the aileron hinge line on Steve’s plane and we will see how it goes but both the returned wing set and the new set are already showing signs of hinge failure so I think I would consider adding tape to all hinge lines or cutting them loose and installing the hinge pins from day 1 if it were my airplane.

The good news is, once we got the plane assembled and at the field… It looks good and flies really well.  The scale details really add to the look and the lights are a nice touch as well.  Taxiing on our grass field was easy and with almost no wind and a short takeoff run the DO-27 picked itself up and climbed quickly.  Steve shortly had it doing loops, rolls, snaps and more.  Power was good and flight times look to be 8-10 minutes of general sport flying… maybe longer with some throttle management.

I’d like to rant about how nice the plane is and in the air it really is.  Flying characteristics (based on the two flights so far) seem to be excellent.  Plenty of wing, good roll rates, just a generally good flying airplane.  Looks too are a plus with nice lights and a distinctive shape and color scheme with a few details thrown in makes for a nice combination.  Assuming the wing tube problem is unique, you have to deal with a few issues… First rearrange things to get the tail linkage setup correct.  Second, you should probably get some short extensions to permanently attach to the 2 shorter servo wires and make them easier to connect and disconnect.  Third, get out your hinge tape or go ahead and install the hinge points day 1.  With those 3 things out of the way, the airplane should be a winner.  Time will tell for sure.