A couple weeks ago I got a call from my flying buddy, Kelly.  It went something like this.

“If I were to buy this T28 Carbon Z… could you store it for me?  Oh, and would you have a battery or two for me to try?  Oh, and could you program my DX-8 to work with this thing?… Not that I’m necessarily going to buy it!”  Right….

Of course I said, “Yes, yes, yes… and bring it over tonight and we’ll get it setup”.  As you can guess, he did and we did!  Here’s what we’ve learned after approximately a dozen flights.

First of all, we took the airplane out with a completely stock setup and tried a few flights with a couple 6S 4000mah battery and while the plane flew nice… it ate batteries at a prodigious rate!  We were lucky to get a 6 minute flight and the batteries were down to dangerously low levels to even get that much.  Horizon recommends 3500-5000mah batteries and claims 8 minutes flight times for a 5000.  We have since found that the 8 minute flight time on a 5000mah is a reasonable estimate however I can’t imagine anyone being happy with a 3500 pack in the airplane so don’t waste time or money on the smaller packs… just go straight to the 5000s… or maybe slightly larger!  Kelly got a few flights today with some new 6S 5300 Glaciers and was much happier with the 7-8 minute flights with 30% or so left on the packs! 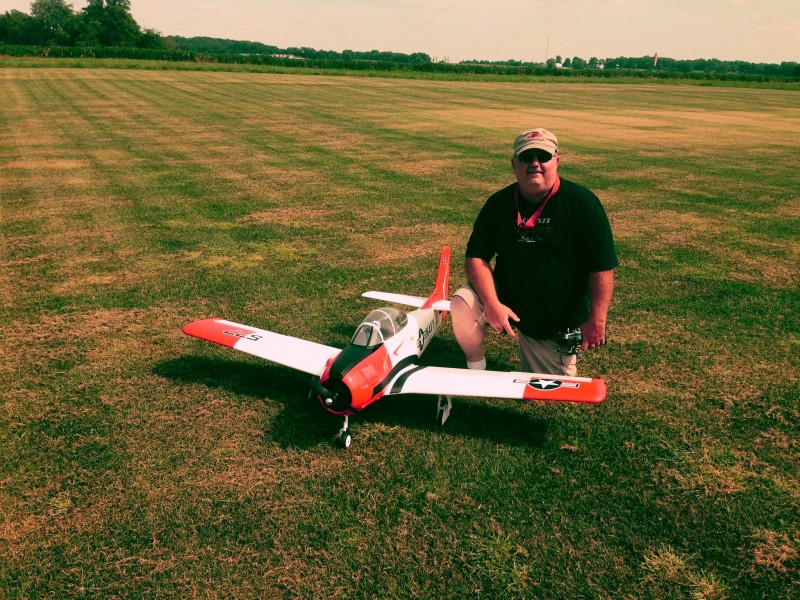 So here’s a few quick tweaks we’ve applied to this point.

First, since we always try to set up a throttle safety/kill switch, that became the first order of business.  In order to get things to work correctly, the throttle cut had to be set to a value of 30…  a bit odd but it works great!  If you leave the default value and power up the airplane with the throttle cut enabled you get a surprise when you turn it off.  The prop starts to turn slowly… sort of a nice low idle!  Since plugging in the battery with the throttle kill set to off/run mode sort of misses the whole point, I recommend you set the kill to 30!  Of course this may vary with other models or types of radios.

Next, we needed to reverse the gear channel to get the switch working the directly we wanted on this bird.  That may sound like just a personal choice but I mention it because it may seem a bit confusing if you’ve not been lucky enough to mess with electric retracts before.  Since electric retracts tend to just stop when meeting a heavy resistance, you may not realize which position the switch is in until you take the load off the gear and flip the switch back and forth a couple times.  Not a big deal but take the time to play with the gear a bit… and who could resist that anyway… to see how this works and make sure all is happening the way you expect.

Third, in order to maximize flight time without endangering the batteries, we installed a telemetry module and attached the voltage sensing lead to the speed control connection.  You can do this a couple ways.  There are harnesses available from Horizon you can insert in line between the battery and speed control or you can simply strip back a little insulation on the speed control wires and tack solder them in… just be sure to protect the exposed wiring when you are done so no unexpected sparking and smoke is likely to happen!  The telemetry module runs fine off of the included receiver, which is great.  We set the warning tone to kick in at 20.5V…  Under load this seems to equate to about 30% battery left when it starts to beep.  This gives you very reasonable amount of flight time left over to make that perfect approach.

So, up to now, the T28 Carbon Z seems to be a hit…. as long as you stay with a large pack!  My limited flight testing indicates it flies… well, like a T28!  I prefer the Carbon-Z Cub but the T28 is the best AS3X equipped plane I’ve flown.  I’d love to try it without to compare.  It doesn’t have the power to weight ratio that the Cub does,  but it can climb quickly on the wing and do nice scale maneuvers.  It also looks beautiful in the air.

It certainly seems Horizon may have another great aircraft in the lineup.  It may seem a bit pricey… but you get retracts, a nicely detailed cockpit and a great looking and flying aircraft for the price with no real deficiencies that I’ve found…  right out of the box.  That is what an ARF should be.