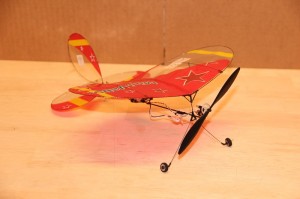 I have so much fun flying my Night Vapor that when the Mini was announced I went to my local hobby shop and put one on back order.  It was a few weeks before it became available but it came in shortly after we fired up the indoor season in these parts so all worked out well enough.

I took the Mini out of the box as soon as I arrived home, took a best guess as to battery placement and quickly shut off the ceiling fans.  A short take-off run down the kitchen island and I was flying… sort of.  OK, so balance was a wee bit nose heavy and it took a few seconds to remember that I had forgotten to do my usual rudder to aileron mix (the rudder is set up to respond to aileron input… which is fine when your expecting it!).  Luckily, the wall is 4 feet away from the kitchen island/runway and not 3!  Once I got the balance straightened out and the mix set up, I was back in the air and decided flying in my living room was probably not a fair place to test out this little airplane.  It seemed a bit quicker than I had imagined and the living room walls seemed to come up quick!  Maybe after a few trim flights in the gym and I could be happily tooling around in my living room like in the video!

So for the next couple indoor flying sessions I did some trimming and balance tests and flew with the stock battery (30mah I think) as well as the 70mah from the Night Vapor.  In the long run, what I figured out was that the Mini Vapor just isn’t (for me at least) up to speed compared to the Night Vapor.  I can fly the Night Vapor in the same space and at the same apparent minimum speed as the Mini.  Also, the Mini doesn’t seem to have quite the power to weight ratio as the Night Vapor… loops are harder to do, max climb is a bit slower and as one would expect, at 1/3rd the weight, the Mini can’t handle wind at all.

So is the mini such a terrible little plane?  Not at all.  It’s a nice little plane in it’s own right and capable of flying in a small space with some practice.  Just the fact that we can go out and pick up a production airplane that is so small and light and flies this well is pretty amazing.  It just isn’t what I wanted and expected.  I’ll still fly it (in the gym) but probably only when the Night Vapor batteries are all on charge!