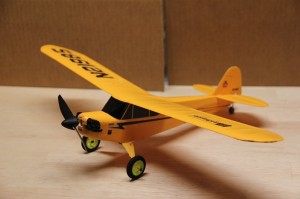 This was my ParkZone Cub.  I recently passed it on to a fellow flyer who simply enjoyed it so much I gave it to him!  A month or so ago at one of the indoor flight sessions I let him have a couple flights with it and he immediately started doing touch and go passes and just generally running around in ovals and having a ball.  He’s the younger brother to one of our best young 3D fliers at my home club (Indy RC Modelers) and he’s had a few little indoor planes so I knew he would have no trouble with it.  When I got home I realized that I had done pretty much all I ever wanted to do with it.  I didn’t need it any more so I fixed up a minor crack that it had earned that night and boxed it up until I saw the young man again.

I was originally attracted to the petite little Cub because it’s a pretty decent looking semi-scale bird…. considering it’s an indoor electric molded from foam!  With some panel lines, a fake engine and with the edition of some “sorta-tundra” tires it looked and flew pretty nice.  My only immediate disappointment was I actually expected it to fly a bit slower.  Isn’t that how Cubs fly?  It seems to need a bit more speed than I would have expected but I adapted to that fairly quickly.  I enjoyed it for a while but over time I realized it flew…. well… like a Cub!  Actually like a model Cub, which is to say stable with better than scale power but limited to the normal things that a 3 channel, micro electric can do.

Over the course of 6 months or so I got a bit bored and soon gravitated toward other, more interesting airframes like the Night Vapor and SBach. The Cub only got flown when nothing else was available or conditions were such that I wanted to fly something “disposable”.  It just wasn’t all that much fun for me anymore.  Don’t misunderstand, I had my fun and felt like I got my money out of it.  It’s still one of the better looking examples I’ve seen and my young flying buddy sports a big smile when he is at the controls.

In summary, I would recommend the Cub as long as you understand what you are getting.  This is not a plane to fly in the house and of course outdoors in mild wind is OK but no more.  Maneuverability and power are reasonable but this is obviously no aerobat!

I would suggest the prop saver option as these are well known for breaking prop shafts (right at the back edge of the prop so you have to replace prop and shaft!) in the case of any nose down landing.  Otherwise, it’s a quality little airplane right out of the box.