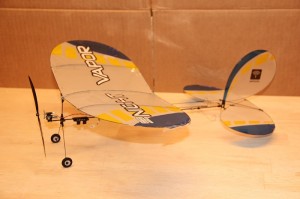 My Night Vapor – showing some wear and tear but still flying great.

The Night Vapor is a sub-one ounce, 3 channel indoor flyer from Parkzone.  I’ve been flying one for about a year and a half and probably have 150 flights on this little aircraft.  I think it is one of the best values in RC, at least for those who are flying DSM2 or DSMX radios.  I bought mine Bind N Fly and have flown it on the JR x9303 as well as (most recently) my Spektrum DX8 and have great fun every time.

The Vapor has a fairly large flight envelope, ranging from medium-slow to extremely slow high alpha, almost hover, which can be sustained for as long as you feel like holding the elevator back and correcting ever so slightly with the rudder (even if it is on the aileron stick) and some very mild jockeying with the throttle.  Fast it will never be, at least in level flight and I don’t recommend high throttle dives.  If you try to go fast, be aware that there seems to be some tendency to warp the wing/tail and everything else in a full throttle dive that may result in some unintended maneuvers.  Buy this plane to go slow and enjoy exploring the low end of the envelope… that is where this bird shines.  Low wind… maybe up to a bit less than 10mph??? is OK but in a gym with no wind or blowers on at all is ideal.

In the gym, doing carrier landings on a standard 6′ table, using the same table as a limbo or even tempting the gods with some “through the rafter” flying is all very possible and a heck of a lot of fun… just don’t expect anyone to climb up there or come up with a cherry picker to retrieve your airplane!

A few tips based on my experience with the Night Vapor.  Once you figure out the proper location of the battery for balance (the whole carrier slides on the fuselage “stick” for adjustment) and get accustomed to the flight envelope of the normal setup you are ready to make a few adjustments to get the most out of this airplane.  That should take about 4 flights as the Night Vapor is really easy to fly, but take 10… it’s all fun!  Save the full throttle setting for fast climbs, loops and the like and stick with the 70mah battery for a while so the balance is consistent and the airplane remains light.  Slow and light is where she shines.

Assuming you have a better transmitter than the little “video game controller” quality that comes with the RTF model (Not saying they aren’t usable but they don’t have the features I’d like) go back and make a few adjustments.  First, move the linkages in on the control surfaces as far as they will go to get maximum throws available.  Then go into the radio and put in appropriate endpoints so that the elevator and rudder can’t bind together when both are at extreme throws.  Add some expo or at least some dual rates and start experimenting.  What looks a lot like a flat spin, the aforementioned “near” hover, tight loops and other interesting maneuvers become much easier at this point.  Try bigger batteries like a 120mah for longer flights but expect to give up just a little vertical and of course low speed, high alpha takes a bit more throttle.  I prefer to stick with the 70mah and 12-15 minute flights are easily attained with it so I see no point in anything larger unless it’s all you have handy!

Finally, you may have noticed this bird has lights on it for night flying!!  I would recommend you get used to day flying first as trying to get used to a new airplane AND trying to stay oriented would be a bit challenging… please don’t ask how I know.  Once you are comfortable this is just about the best thing every built for cruising around the night sky, (not too far away) making touch and goes off the top of your camper or other nearby “landing strip” and just generally having a good time out of doors after the sun goes down.

In my book, the Night Vapor is an airplane I would likely replace immediately if something untoward occurred.  Of the 14 or so flyable airplanes I own… few fit in that category.