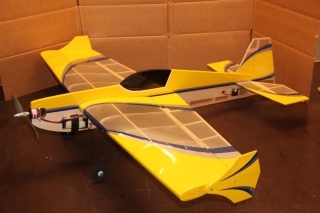 My Aeroworks Extra 260 EP-3D ready to fly… not much more than a static model at this point!

I created the motor mount (just a light aluminum plate with some holes drilled) as I didn’t want to spend the $80 for the motor that was recommended and this one (at around $20) used a Y shaped bolt pattern as opposed to X-mount that was provided for the high dollar motor so modification was in order.  At this point “flying” has been limited to hold it pointed to the ceiling in the garage and throttle up until I can let it go and quickly grab it again before it wants to hit the ceiling.  That is seemingly happening with about 50-60% throttle so power won’t be an issue.

The last few days have ranged from 15 above to a few degrees below (Fahrenheit) and I am fond of 75 degrees, sunny and no wind so it will likely be a few weeks before it gets a proper test flight!

Well in all honesty I did fly it once early on with an over sized battery (hard to find anything large enough that fits the slot cut for it) right before the cold winter weather set in but that was limited to just confirming it flew, nothing fell off and everything responded to control inputs properly.  It was to windy and cool to make a proper assessment that day so while nothing catastrophic to report I can’t say if it flies well or not yet.

I may move it over to a new Spektrum 4 channel receiver before my next chance to fly.  Dropping the remote will save a bit of weight and I’d rather have a Spektrum brand receiver than a knock off anyway.  I’ll feel more confident about flying it way out and up and with the new receivers being only $30 or so I don’t mind paying for the Spektrum name.  Besides I’m only using 4 channels and this way I can get closer to having all of my fleet on DSMX.