Two months or so after first picking up the ProtoX, I was in my local hobby shop. I was just perusing through the latest toys and thinking how I really liked the looks of the new Platinum series Super Cub from E-Flight… but decided to wait on that for a while. I already have plenty of unfinished projects in the shop. As I continued browsing I came to the section where all the quads were displayed. I started thinking of what I wished my ProtoX could do… Binding to a “real” radio, better stability, maybe just a bit bigger to make it more visible… and not too expensive.

After looking over the options I realized the Blade Nano QX might be a lot closer to what I really wanted… and for only $65 or so plus a couple spare batteries… This thing looks great… I should get one. I deserve one. I was reaching for my wallet when I remembered. I was just looking!! I tore myself away just in time and roared out of the parking lot with my money intact… Whew… that was close.

24 hours later I was walking out of the hobby store with my new Blade Nano QX… I was already thinking about how i could program my DX18 to make this thing smooth. Hey, I’m only human!!

Here are the most important parts arrayed on the table… 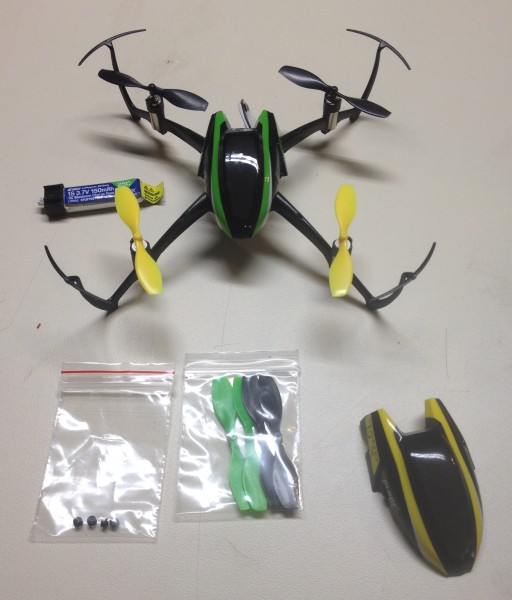 In addition to the additional props, extra canopy and grommets (shown above) there is a USB charger for the included 150mah 25C single cell LiPo.

So I’ve only got a few flights but here’s what I’m thinking so far.

First of all the Nano QX can fly in one of two modes, Stability or Agility.  Stability mode utilizes the built in SAFE (Sensor Arrested Flight Envelope) system to keep the 18g quad from getting to far off level to quickly.  The biggest noticeable effect of this mode is that when you release a directional control, the system seems to feed in opposite control in order to arrest whatever motion was happening.  Add this to the slightly heavier airframe (compared to my ProtoX) and this thing is much easier to keep in a smooth hover.

Switch into the Agility mode and “wow” does everything change.  No more automatically stabilizing the Nano when you release the controls.  If you push in some “aileron” and then release… the Nano just keeps on moving.  You now have to push in some opposite control to get things back to level.  It’s very easy to get into oscillations… trailing behind the flight and over-correcting.  It can quickly become a problem if you don’t switch back to Stability mode!  This is no fault of the Nano of course, just my inexperience with the little quad showing through.

Flight times seem to run about 5:30 to 6:00 minutes before she powers down and forces a landing.  The on board LED is used to let you know this is occurring as well as signaling the two modes, for binding, etc…  It is not particularly useful for orientation.  For that you will have to rely on the canopy coloring and shape along with the color of the 4 props.

I have been flying the Nano QX with the setup of my DX18 configured exactly per the manual for the first flights but I now have some ideas about additional programming I intend to add.  I’ll cover that in another posting soon.

Overall I am very happy with the QX so far.  It looks like the Stability mode is doing a very nice job and the overall flight characteristics in this mode are very encouraging.  Having the advantage of full capability radio (the Nano is a DSMX compatible craft) even doing just the very basic functionality allows for much smoother control of the QX.

I’m already seeing that the biggest disadvantage of the QX is the lack of “navigation” lighting.  This means that when moving quickly or when the airframe gets off at a distance, orientation becomes a challenge.  I’ll have to look into ways to address that eventually.  I’m also going to start with some additional programming to help tame the Agility mode.

Otherwise, my initial impressions are that this is a big step forward compared to the ProtoX.  I’m looking forward to getting in some more flying and learning a bit more from the Nano QX.