I’ve had the Nano for a few days now… maybe a dozen flights and I’m enjoying it very much.  Straight out of the box and with the radio configured per the instructions (Using my DX18) it is a nice flying aircraft.  However… there’s always room for improvement, right?

So here is what I’ve done to program my DX18 to help the little quad fly even better.  Here’s my list of “wants” that I came up with:

With that in mind I started to do some programming on my DX18.  As I thought about what I needed, it hit me that what I really wanted was to use “flight modes”.  With the FM feature, a single switch or combination of switches can change multiple settings including end points, dual rates, expo settings and more.  I have never had a real need for FM, though in some cases it might be equivalent to or better than what I do now, but this seemed the perfect fit.  I wouldn’t want to enter the agility mode without also dropping my rates down and adding some expo and doing that all on one switch seemed ideal.  I knew there was some reason I bought this expensive radio!

The throttle cut function was easily added as was a timer… very standard and easy to do stuff.  But the next part got a bit more difficult.  The mode change (Stability or Agility) on the Nano is set to operate off of a temporary switch… in this case button “I” which is often used as the trainer switch on most radios.  I now wanted this to move to one of the 3 position toggles so that it would happen in concert with my flight mode changes.  It isn’t difficult to reassign this function (in this cast AUX1/channel 6) but when I did that I quickly realized that this was not going to work as intended.  I had thought I would have 3 flight modes.  FM1 would be stability mode with full throws and a little Expo (maybe 30%) thrown in to help me be smoother on the controls.  FM2 would be agile mode with moderate throws and a similar amount of Expo with FM3 being “crazy 3D guy” mode with full tilt throws and a much greater expo setting (maybe 70%) in order to keep things from being to touchy.  Not sure I’ll ever need that mode and maybe I’ll switch this around later to 2 Stability modes and only 1 Agile mode option but this is my desired starting point.  After adding in the “Quad” graphic the main screen shows the modes as seen here. 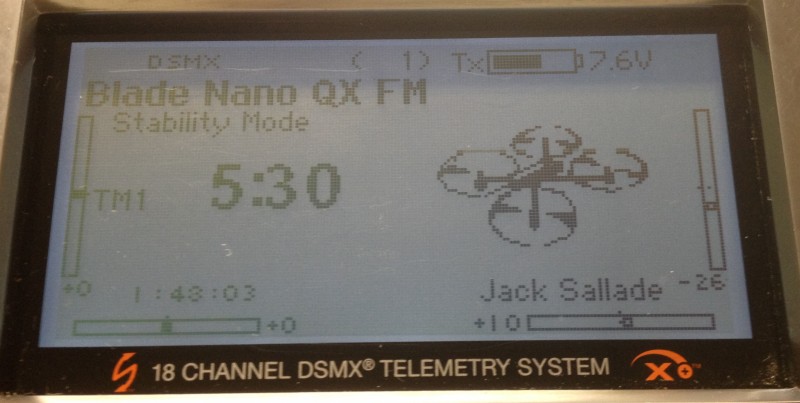 And FM2 – Agility Mode I 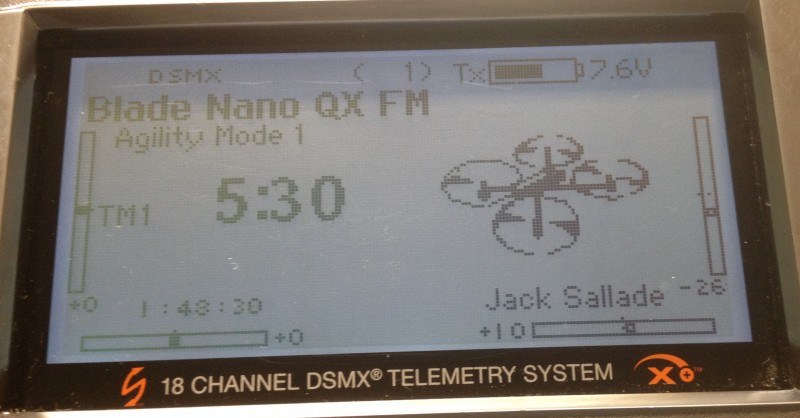 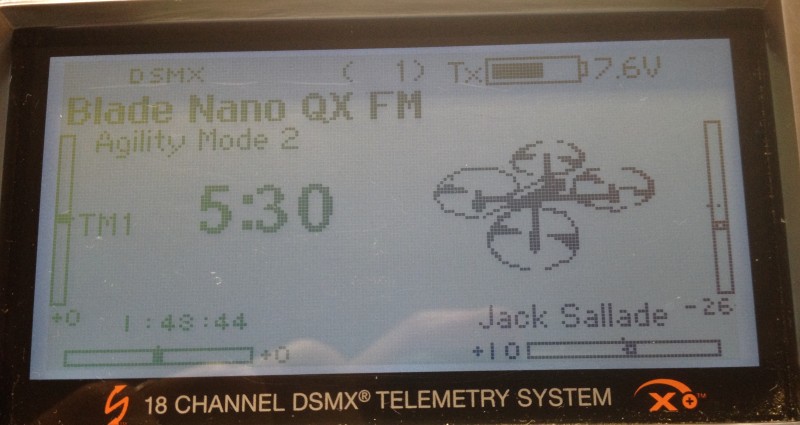 That all looks good but after moving the AUX1 channel to a three way toggle, a quick on-bench test immediately brought a problem to light.  The Nano wants to see a temporary Off-On-Off type of signal to change from Stability to Agile and vice versa.  Just going Off-On didn’t do anything until you came back to Off.  Imagine toggling the switch from 0 to 1 (no change in Stability mode but more throws) or moving on to 2 with lots of throw and expo but still in Stability mode… no big issue yet.  But, then going back to 0 and suddenly you’re in Agility mode but with full throws and low Expo… yikes!  For a bit I thought I was stuck… but then the DX18 came to the rescue.

The DX18 has something called a sequencer.  With the flip of single switch you can have a series of events occur.  In this case I setup the sequencer so that going from 0 to 1 (or 1 to 0) caused the Aux1 channel to move to full (step 1) and then back to start (step 2) with a delay of about a half second in each direction.  This sent the correct sequence of events just like hitting a temporary switch.  Moving from position 1 to 2 does not have an associated sequence as I’m already in Agile mode after I move from 0 to 1.  Nifty!  The only catch here is that you have to start with the switch in the correct position.  That’s not a big problem as I have a habit of having all switches pushed away from me when I power up my radio.  I found a way to help with that issue as well though.  More on that a bit later.

With that solved (it’s easy to test for this on the bench as the Nano changes its LED from blue to red when you enter Agility mode) I moved on to setting up my throws (End Points and Dual Rates) as well as my Expo settings for each mode.  With that all accomplished I did a quick trial flight and so far everything is working as planned.  Of course nothing is perfect and I started thinking that I really wanted to insure I powered up the radio in flight mode 1 and with the throttle cut engaged.

This got me to looking at another underutilized (at least by me) feature of my DX18 and that is the preflight checklist.  I immediately found this feature to be quite simple to use.  I have to say I sure wish I could edit the checklist descriptions, but I found two that are close enough that reading them will get me to thinking about these two important switch settings.  My Mode Switch is using a switch that I often use for flaps on other aircraft so the “Flap Position” checklist item works for that and the “Thro. Trim Position” gets me thinking about throttle enough to remind me to check the throttle cut switch.  Of course these check box items don’t actually check the position of those switches for you, but you can (and I did) set the radio so that it will not start sending RF until I check the boxes, and you have to do it before each flight (assuming you turned off the radio or went to another model memory in between).  At least it gives me one more chance to get it right before taking control of the Nano!  Here is the setup screen for that feature. 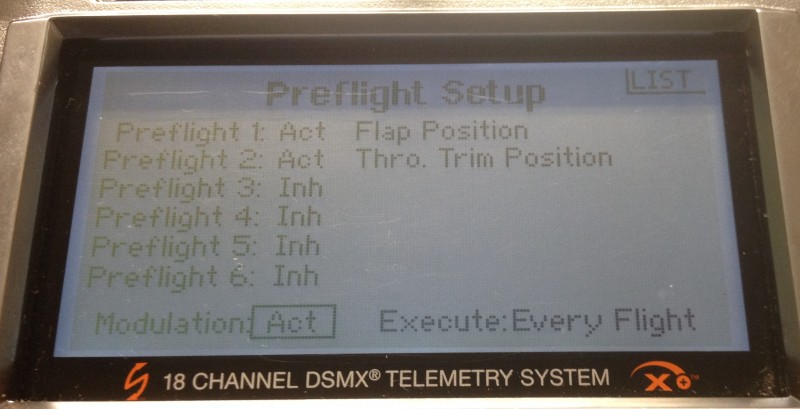 And Here is what the preflight screen looks like on power up. 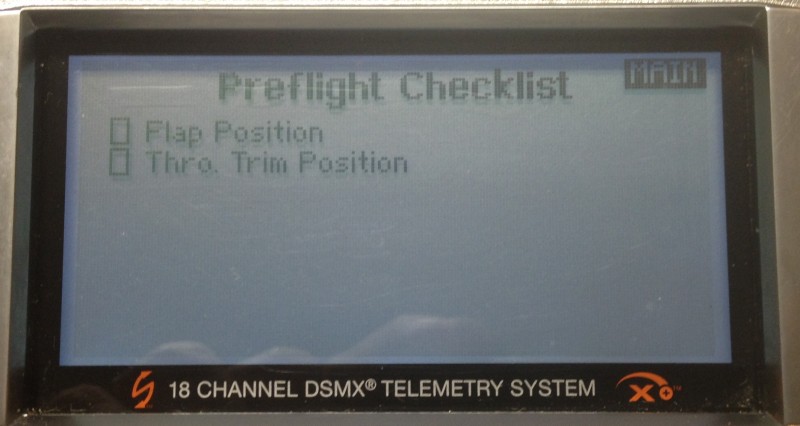 Lastly another thought occurred and I went into the warning screen and made it so my radio would alarm if my throttle wasn’t at idle (or at least nearly so) and/or I wasn’t in FM1 when I start up the radio.  That’s even more foolproof than the checklist!  Here is the setting for that:

I think this gets me “in the ballpark” as far as radio setup goes.  I’ll undoubtedly adjust my expo and dual rate settings but those are minor tweaks.  With this configuration I have checked off all of my wish list and gone a bit further on safety and initial start up settings.  So far after a couple more test flights after all this was configured I am well pleased.

Only 0ne more issue to tackle… that of visibility.  I have some ideas on that and I’ll post on that soon.  Happy hovering!