A few days ago, the two P-38s finally got to go visit the field.  The last couple adjustments that were needed seemed to be finished up and there was nothing left but to fly them!  Several club members gathered to watch the inaugural flights. 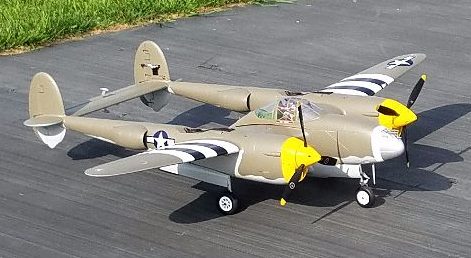 My green P-38 with the addition of invasion striped on the wings was first to go.  I had 2x3300mah batteries on board pushed all the way back as a best guess center of gravity.  The final run up up of each individual motor/speed controller was accomplished in the pit area just before taxi out for take off.  I must say the wire connections to each wing are somewhat tedious.  There is not much extra wire to make connections and my hands are not very small.  Also the lighting connectors are NOT polarized plugs so you also have to be very cautious of plugging those in with the proper polarity.    Then the tedious stuffing of the wires into the small opening (individually… there isn’t room to do them all at once) while simultaneously sliding the wing panel onto the body.  As I said, tedious.  Of course you have to do this upside down and I was trying to be very careful not to put any pressure on the canopy (removed that) or the props (suspended off the edge of the table).

Finally, all assembled and I immediately noticed that it was a bit difficult to turn left on the ground… I suspect the cross wind from the right hitting those two big verticals is responsible for that!  But she lifted off pretty quickly.  I had to do quite a bit of aileron trim to keep it level and some elevator trim to keep the nose up.  I’m betting the aileron trim is a result of the inboard wing edge that is warped downward on the one side.  Finally, all level and flying smoothly I started to pull a loop but decide not to since it appeared that my elevator travel was a bit low and there was not a blazing amount of spare power either.  No big deal, I’d been flying for a few minutes so I might have been getting some sag from the batteries by then, so I just decided to get back on the ground.  First pass I came in without flaps and it was sinking awfully quick while still flying pretty fast so I went around and dropped half flaps and tried again.  My guess for elevator mix must have been about right and I came in a bit slower but still with a pretty fast sink rate…  That made for a moderate “hop” and then too much speed as I ran off our Geotex into the grass at a good clip.  That arrested the speed within another 15 feet or so but as it did so, one of the mains folded up!!  That was very disappointing as I really thought it wasn’t a terrible landing for the first attempt.

Here’s the retract with a bit of foam still attached… but not much. 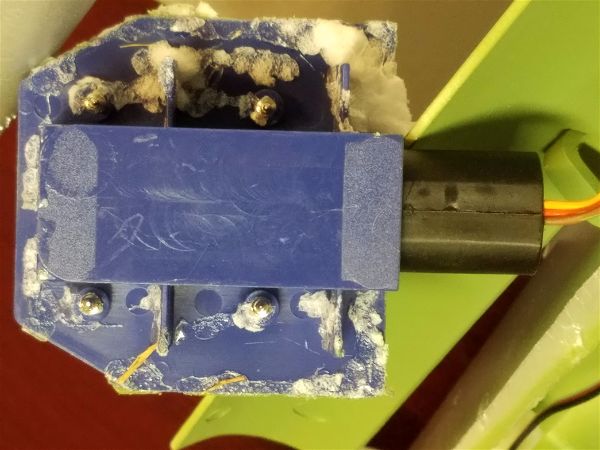 And here’s the foam socket with (apparently) very little glue. 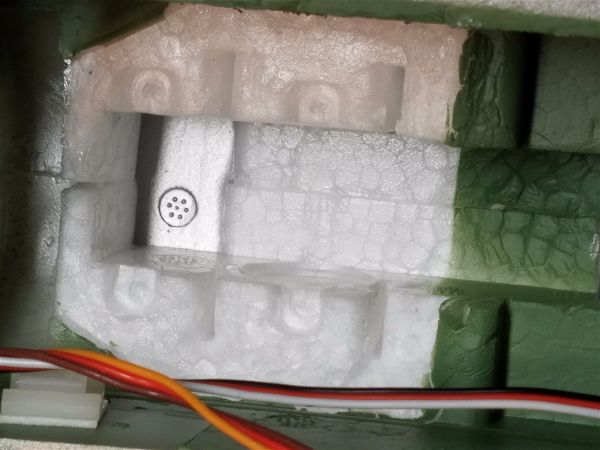 Further inspection showed that the gear mount had separated from the foam from (in my opinion) a notable lack of glue…  There didn’t seem to be any other damage but I was obviously done for the day.  I try to minimize repairs at the field, generally opting for moving on to another plane if the program is just casual flying so I went back to help Kelly work on his P-38.  Another impression I had after the flight was that the plane flew somewhat “heavy”… i.e. it flew like a warbird.  I was hoping for a bit more of a “foamy” feel to the plane but it was not totally unexpected with the modest wing area compared to the weight of this airplane.  I had read where some folks talked about it flying fairly light on the wing and coming in slow but that was NOT my experience.  Those guys must be hard core warbird flyers who are accustomed to the heavy wing loading of that type of plane.  For me, it seemed heavy but I don’t think I’d want to fly much less battery capacity as flights would get very short I would think.  Based on just this flight, I don’t think my 3300s will get me much more than 6 minutes, but I’ll have to fly a few more to be sure.  I wasn’t paying strict attention to that with all the other maiden flight checks and nerves going on.  Finally, the P-38 does not like to turn with just aileron.  It needs either some rudder mix or at least a pilot with a left thumb that doesn’t fall asleep from lack of use once airborne!  I fly a few other planes that like rudder in a turn (a Carbon-Z Cub, a Telemaster) so I adapted to that fairly quickly, though it will take a bit of flying to get just the right feel for it.

Moving on to Kelly’s P-38 in “Pacific Silver” we went through the same preparations and then he was off the deck.  In short order he was having problems getting the plane to turn and there were a couple times when it looked like he might not be able to control it to get it back down safely.  Finally, he was able to herd it onto the Geotex with a fairly fast but mild landing.  He too ran off into the grass and immediately one of his main retracts folded as well!  This aircraft definitely isn’t built for any but the smoothest runways!

Later inspection showed his retract to have a pitiful amount of glue as well, so apparently I didn’t just get the one built on a Friday!  Between the battle to keep the plane airborne… it seemed to be constantly yawing to one side… and the retract issue, Kelly was very disappointed with this aircraft.  He was running a single 5300mah battery and it certainly appeared that his airplane flew similarly to mine as far as landing speed and overall handling even with the somewhat lighter pack.

I am working to replace the retracts in both planes with a bit more generous portion of Foam-Tac and hoping we can keep those in place.  We are extending the Geotex runway soon at our club field so hopefully we won’t run off quite so easily anyway but it is disappointing that these are so fragile.

I have a theory on why Kelly’s plane seemed to have a serious yaw issue… more on that after some investigation.  So far, neither of us is particularly fond of the P-38s.  Hopefully we can work out the wrinkles and get in some more satisfying flights soon.