Well for the last couple years since I sold my 55cc gas powered Wild Hare Slick 540, I’ve really missed having a big aerobatic aircraft.  I even considered swapping it to electric before I sold it but 50cc powered electric aircraft were a bit above anything I considered “reasonable” and I was moving toward converting to an all electric fleet and needed some seed money to make it happen.  Twenty cc equivalent power was near the limit at the time, at least in my mind.  Now I know that is an entirely personal measurement, but to me the battery power needed, cost of the motor, charging gear required, etc… were just a bit beyond what I wanted to take on to get to a 30cc or above power system.  Pretty much no one in the mainstream offered such a system and you really were getting a bit out on a limb to put something together that would perform well at those higher power levels.  If you purchased the wrong component the performance would suffer and so would your wallet, in a big way.  Plus flight times were woefully short on the systems I saw that I thought showed truly equivalent performance to for my big Slick.

Fast forward to March 2017 and I am looking again for a bigger E powered aerobatic aircraft.  I was shocked to hear that Aeroworks had gone the way of the dinosaur… I was flying a 90 size Extra of theirs that I loved but it still flew to “small”… so out the window went my idea of a 30cc size upgrade for that same Extra 260 which they made in several sizes.  With 30cc equivalent seeming to be a new sweet spot for E flight, I started looking around.  After a bit of searching I re-discovered Extreme Flight.  They not only continued to build their own brand but they had gobbled up 3DHS and some others and some of the newer line of planes intended for E power looked nice.  When I found they had a (by all accounts) high quality matching power system I got serious and homed in on what I thought would fit the bill.

I pretty quickly fell in love with the Blue and Yellow scheme on the 74” Laser and I couldn’t believe how light this plane was reported to be for it’s size! 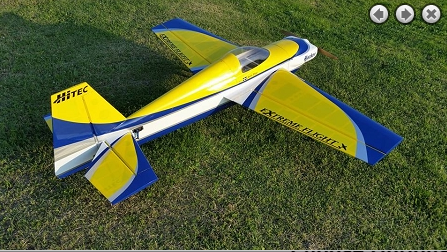 With the 35cc sized Xpwr motor on board the plane would be well over 250 and possibly close to 300 watts per pound!!  Even though I’m no 3D pilot, I do enjoy flying IMAC style flights and having the power to pull into a vertical and only then roll into the power for a nice constant speed line is something I never get tired of.  To do it consistently requires 3D level power and a little practice time.  This combo looked like it would provide for that possibility… only I would be the limiting factor!  It may not be quite the 87″ Edge, but it could be close enough to scratch that itch and give me the smooth lines that smaller planes just can’t provide.

So with a few days to spare I made the call and had the guys at Extreme Flight put one on the truck for me to pick up at the Toledo “Weak Signals” show.  Picking it up there would save me almost $150 in shipping and justify making the 4-5 hr trip (one way).  Of course I was always going to the show anyway but now I had a really good reason!!  Going to the show was going to save me money.  Or at least that is the way I explained it to my oh-so-understanding wife!

Long story short, I brought home not only the aircraft but the standoffs, servo arms, a full set of Hitec 7954SH servos, a pair of LiPo batteries, a Castle Edge HV-120, and spinner.  Yep, pretty close to the full boat!  Since then I have picked up some props, a Castle Xbus Telemetry Link and couple other little items I need to get it in the air.  This week I have begun assembly and will post more as I get it all together.

My expectations are high and I hope it performs just half as well for me as Jase makes it look on the videos… of course it’s obvious Mr. Dussia could fly a brick with an .049 on it and make it look better than my best efforts with any aircraft I own, but it was nice to talk to him there in the booth and get his advice on the right equipment to pair with this air frame.

I’ll post some more as I do more of the build to update how it’s going and share my experiences with the Extreme Flight 74″ Laser.