In part 2 of my commentary and running monologue on the Hangar 9 Carbon Cub, I mentioned that I would cover the bottom vent that I added and some other mods so I will show you a couple of those here as well as try to relate my sense of how she flies.  First the build and modifications update. 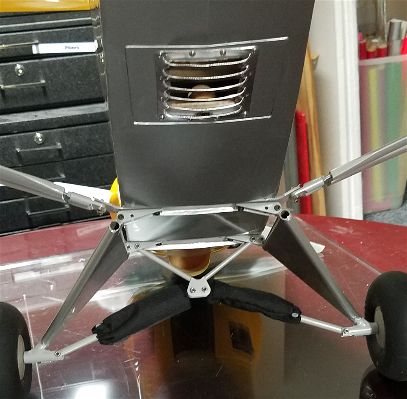 Looking at the cub I realized there is not a lot of accommodation for air flow and even if it isn’t much I’d like to have at least a modicum of air passing over my batteries inside the cockpit area.  So without just cutting open a whole section between formers/bulkheads in the bottom of the tail I needed another solution.  What I came up with was to cut open a section in the only solid area behind the cockpit, which is the hatch for servo access.  I happened to have some louvers laying around that I picked up at a swap meet so I cut an appropriate sized hole and drilled a few holes for button head #2 screws and created a nice louvered exhaust vent.  It’s very nice looking (even if not quite scale!) and looks like it belongs there.  Was it enough exit area…  well read on.

Taxiing out for the first flight on the airplane, everything seemed great.  I had done a balance check, the prop seemed to be well balanced, producing a minimum of vibration, all the surfaces were moving in the proper direction and with the proper authority…  Nothing left to do but fly.  Unfortunately upon reaching about half throttle, about 10 feet into the takeoff roll the top hatch that I had created decided to eject.  Testing a second time showed the same issue.  It hadn’t been jolted loose on a bump either it was simply being swept up by some combination of the air moving over the top of the wing and the air pressure forming inside the plane as the motor forced air into the various openings in the firewall.  While the louvers I had installed on the bottom of the plane might insure a good vacuum to pull some air past the batteries once she was in flight, they didn’t do enough while the plane was just starting to roll to avoid the top hatch getting popped open.  For the day, I simply applied some box tape along the front and rear edge of the hatch and things were fine from that point on.  For future flights I had to do something to make the latch mechanism a bit stronger.  Clearly the magnets I had in place were insufficient.

Before the next flight I eliminated the magnet and screw head that I had used to secure the hatch and cut a groove in the wood and created a tab using a servo horn to form a rotating latch that would insure the hatch stayed in place.  Ten or so flights later, this seems to work well.

The final lesson re-learned on the second or third flight of maiden day for the Carbon Cub was that you should always tighten all the screws and check all of your servo arms, linkages, etc… before flying.  The rudder and elevator servos are under that bottom hatch and so not observable without unscrewing and removing the bottom hatch.  Apparently, when I was setting up the plane, adjusting throws and linkages and such I had neglected to make sure all of these were tight.  The servo arms are metal and are a decent fit but slightly loose on the servo shaft.  If the teeth are engaged there is zero slop but if you don’t tighten up the servo shaft screw the arm will slip off and rotate out of place… especially when sitting in the trailer, bouncing down the road under the force of gravity I imagine?

So 2 or 3 flights in was doing some stall turns and I was getting adjusted to just the right inputs to get an acceptable looking maneuver when it flopped out of one of my attempts.  Since I was low on battery I decided to come down and check out my throws and see if I could improve on the next flight.  When I landed,  my plane was crabbing slightly toward the pit area so as soon as the tail dropped down to join the mains on the runway I started to feed in just a touch of rudder to straighten the roll out… It wasn’t enough so I pushed in more but nothing occurred.  I was far to close to the pilot line and rolling fairly slowly so throttling up without being able to change heading was not an option, especially with a plane I had only a couple flights on and knowing someone was occupying the flight station I was quickly approaching.  Instead I hit throttle kill and watched it roll up and bump the flight station.   Other than a startled fellow pilot, no harm was done.  He maintained focus and control of his airplane and I went down and apologetically retrieved my errant bird.

Of course as soon as I saw the rudder “freely” swinging in the breeze I dug in and found the culprit quickly.  I applied just a small amount of nail polish (thread locker is known to attack some of the “plastics” used in servos… Hitec Karbonite in particular but others as well… so I largely avoid it around my servos) and tightened the screw and have had no further issues with this connection since.

Flying with the Power 60 on 6S

The Hangar 9 team recommends the Power 60 for the Carbon Cub if you are going electric and I think they have a pretty good combo here.  With my 6S 5000mah packs I believe the plane is capable of handling about anything the real world plane can do, and perhaps a bit more.  This does NOT include an unlimited vertical climb with out assistance from the wings but it is not far from it.

My impression is the plane flies just a little “heavy” on the wing and thus requires a bit more speed than I would like, but keep in mind I fly mostly very light, overpowered aircraft like my EF Laser on an Xpwer 35 and 12S, the Timber X on 4S, the Uproar on 4S, etc…  For a war bird guy, this thing would probably feel lighter on the wing than most and most scale pilots I suspect would see it as being “about right”.  You have to remember that while it has “Cub” in the name it is NOT the ubiquitous yellow J-3.  It is not a floater that is hard to get on the ground but it is predictable and smooth.  If you incorporate the flaps into your landings (as you should), the plane will land at a very manageable moderate speed with only a little time spent with the tail still flying after touchdown.  It’s not a total kitten either in the air or on the ground but in return it is a very capable flyer and a beautiful airplane both close up and in the air.