I have always liked a nice pilot figure in the cockpit of (particularly) scale airplanes but I won’t put one in if I think the airplane isn’t a good flyer already or if I think the additional weight will negatively affect the aircraft.

I also don’t like to spend a lot of money for something that isn’t going to make the plane fly better.  As a result, few of my airplanes sport a pilot bust of any sort.  However…

With the outcome of my recent conversion of a Top Flite P47 to electric power being successful beyond my expectations I felt like I might want to find something to fit my new favorite warbird!

I did a lot of looking around and eventually I was getting the usual deluge of ads in Facebook, on email and in my browser for every size and type of pilot bust imaginable and in every price range from custom full body figures costing hundreds of dollars to plastic profiles barely recognizable as pilots for a couple dollars.

Finally I ran across an ad from one of the vendors that I’d done some business with in the past and started looking at the Benchcraft line of pilot busts.  They are very reasonably priced and come in something like 14 varieties ranging is size and type (jet pilot, WWII pilot, civil, etc…).  I found a couple of likely options and then saw a few others that might find homes in some of my other planes so I ordered a half dozen different figures including two likely options for the Thunderbolt.  I could do this because these are mostly priced in the range of $3-$6!

Here are some examples. 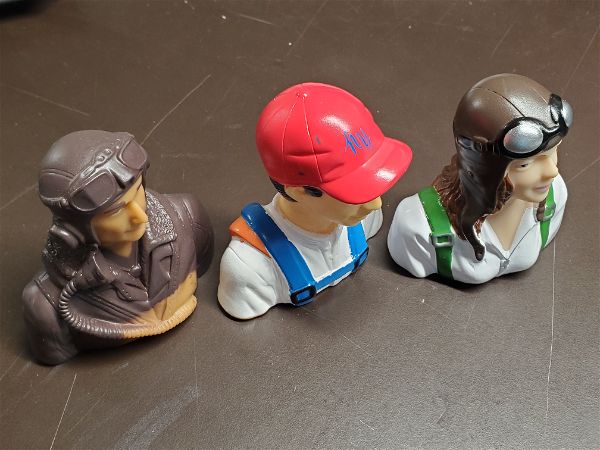 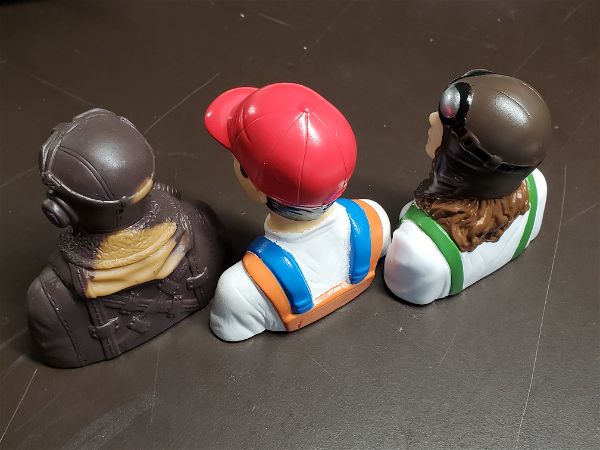 The lady and the guy in the red hat are both pretty decent figures for adding that little something to your airplane if you aren’t going into competition!  These aren’t masterpieces of scale modeling by any means but really pretty nice for the super low price and you can always dress them up a little with your own custom paint job if you so desire.  OK, I don’t know what the logo on the front of his red cap is supposed to be… hy? ky? ny?  No idea.  And yes, there are a couple of errant blue dots on his hat but again, the price is right and they are nice and lite weight.  I may try my hand at some painting some snowy day to see how good I can make one of these look but I’ve seen much worse in some ARFs I’ve bought.

The WWII British pilot bust leaves me a bit mystified I’ll admit.  every bit of him except his eyeballs is either the natural “light brown” color of the material he is molded out of or the dark brown that I would presume would make sense as his jacket color… and you can clearly see that there is little rhyme or reason to which is which.  The mold is OK but the paint job looks like it was done blindfolded.  In defense of Motion RC where I purchased these, it exactly matches the picture on the web site so you are getting what you should be expecting!

I chose the BenchCraft American WWII pilot bust for my P47 and so cut away the canopy glue (luckily Zap canopy glue is what was used so this was possible without crazy amounts of effort as it stays pliable) to allow access to the cockpit.  I lost a bit of covering and had to add a little cross brace to mount to in order to get the pilot situated in the proper position.  Here he is ensconced in his new home. 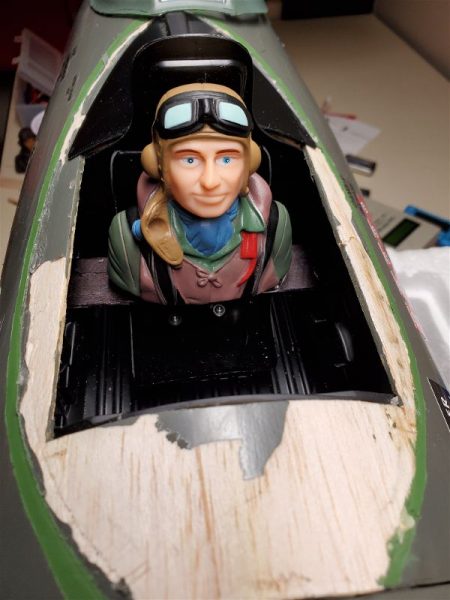 Next came some covering patchwork inside the canopy area and then a reapplication of canopy glue and the Jug is ready to fly again! 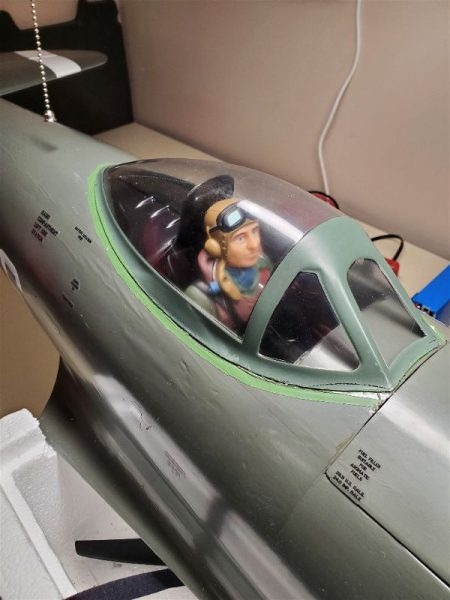 As you can see, this figure has a much higher quality paint job than his British counterpart and I didn’t feel the need to do any touchup on him.

Similarly I added a figure to my 74″ Extreme Flight Laser and I may yet install a couple of these others into some other planes down the road.  If your looking for something inexpensive and lite weight to make your cockpit look a bit more realistic, take a look at this option.