A couple weeks ago, my only glow powered airplane lost its battle with gravity.  “The Pig” as we called it had seen better days and we think the wing (which had a couple of weak spots) may have just made one to many 8G turns…  It dove hard into the ground and shattered the forward third of the body.  The wing was in 3 pieces as well so not much left to work with.  Nor was I particularly interested in spending a lot of time and money on a truly major rebuild anyway.  There are lots of old beaters around to chase gliders with (it’s main occupation the last several years).  RIP “Pig”.

Whatever the cause, it meant that I had only one glow powered craft left… my Dumas Windy air boat.  That meant I was now in striking distance of finally getting completely out of the glow business.  No more messy oil coating every surface, eating finishes, staining shoes, etc… etc…  No more obsessively tweaking the needle for that little extra kick.  No more disappointment when the glow driver battery was dead.  No more little slices on my fingers from flipping those insanely sharp composite props.  I can do it!  I can be free!!  Maybe I could even find some poor soul who hasn’t yet tried to kick the habit to unload the remnants of my stash?  Someone who is still completely in the grasp of that cruelest of mistresses…

Yep, I recall when I was hooked.  The smell of warm castor and the ear piecing shriek of a 2 stroke at 15,000+ rpm was what I craved.  When I tried to escape I was simply lured in deeper by the mellow tone of a 4 stroke purring away at an idle so low you can practically count the RPMs.  And the price just kept getting higher.  10/15 wasn’t good enough anymore, now I needed 20/20 or better.  The “dealers” kept pushing harder with gold plated (literally) and chromed editions that I simply had to have.

But I’m almost free now.  If I can find a replacement power system for the LA-15 (blue edition of course… I could never stand the cheap stuff…) I could be free.

I quickly realized I already had a possible alternative.  I had recently purchased the remnants of a E-Flite Timber.  The electronics and power system were all intact to all appearances.  So the plan was hatched.  I would transplant the BL10 from the old Timber onto the Windy.

First I stripped the LA-15 from the boat and placed it into my swap meet box.  I only took a quick sniff from the muffler as I polished it up a bit for display… (Don’t judge if you haven’t been there).  Twice it occurred to me how reliable the 15 had been and how well it would pull the half finished little mustang that lay just across the shop but I summoned up my will and closed the lid on the swap meet box firmly.

Once past this job I quickly stripped the on board battery, throttle servo and fuel tank.  After gathering a few supplies at the hardware store I managed to space out the BL10 motor with some nylon spacers, threaded rod (hacked to length) a few washers and some nylon insert nuts.  The firewall looked like it was about ready to give up the fight: 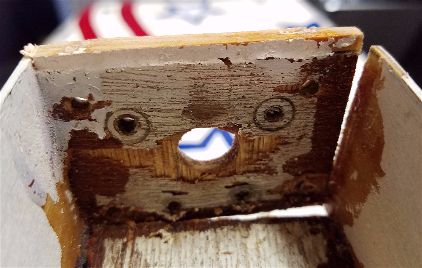 Some medium CA and kicker was employed to solve that issue.

I kept the little 7×4 3 blade prop.  At least for now.  There just isn’t clearance to go to a higher diameter prop and  I haven’t found much else that looks like a good fit, so for now this is it.

A bit of temporary Velcro strapping to temporarily hold the speed controller in place and thing were looking pretty good. 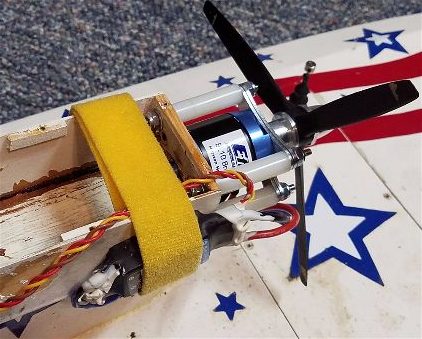 Time for a quick test.  Using a 3S 2700 I measured about 11A and 130W of power draw from the battery.  A quick test on grass confirmed that this is just not the same level of power as the old 15.  I tamped down the temptation to re-install it (I get stronger ever day but the temptation never seems to die!) and did a bit of research .

A couple days later I recalled that some Timber owners had run this motor and speed controller on 4S packs… and with very little difference in prop size they had reported continued health of the power system.  So I decided why not.  This time with a 4S installed the meter showed 270W and 18A of draw!!  I was running this test on carpet and the boat took off across the room when I released it and without even reaching full throttle.  This combination looks good.  This alternative to glow for this boat seems great, no side effects apparent… I might make just make it!

During a final test… just for fun.  I noticed a brief stutter on startup and then again at a higher throttle… I thought the motor was going to shake apart.. what the heck??  Oh well, I guess there are always slips along the way…  Guess I better start researching this new issue…