One of my more recent additions to the RC hangar is not a new airplane but instead a new controller.  I have been using a DX18 for a few years and have found it to be an excellent radio.  I have zero complaints operationally with the 18 but I really like the newer designs that have come out without all the excess “chromed” plastic.  What’s the point in putting a coating over plastic that will eventually wrinkle/peal and otherwise just create issues?  It looks nice if you like chrome I suppose… never a big draw for me… and sometimes can create glare issues on especially sunny days.  Also, while not a big fan, there are times when a voice notification would be welcome.   I’ve held off because previously they were rigidly defined.  Want the radio to say “charge my battery!”?  Sorry, the only message available is “low battery”.

Spektrum’s approach of putting an Android tablet functionality “up front” in the iX12 sounded like it would have some nice advantages and I haven’t yet needed channel 13 and up on my DX18… so after a bit of research I took the plunge.  Hey, it’s a hobby!  If I’m going to get a little closer to the “bleeding” edge of technology in some facet of my life, this is the place to do it.  So after some time with the radio here is what I have observed and what I’ve done so far.

So far, I have had zero issues… I am somewhat familiar with Android so I think I have avoided some of the odd issues that folks on some of the forums have reported.  I moved 16 models over from my DX18 Gen 1 and everything has worked great so far.  I’ve flown a couple small quads plus 4 or 5 indoor airplanes and other than messing with the spoken prompts, I haven’t modified my setups at all.  Generally, I like the look and feel of the mechanicals of the transmitter.  If you’ve ever handled a DX9, you will find much of this radio to be very familiar.  Some parts of the box are even better, like the back sliders (which I rarely use) being much smoother.  The UI is not yet totally intuitive to me but I’m getting accustomed to it quickly.  I am beginning to like the text to speech options though I wish the audio defaulted to all OFF.  Will probably build myself a template for future use to accomplish this.

The radio is not capable of terribly loud audio levels and some have complained about that.  It certainly is not capable of the same volume of the DX9… Of course folks complained about distortion with the DX9 so Spektrum may not have been able to win this one!  Volume is not an issue for me as I intended from day one to use a blue tooth headset as I hate hearing the constant chatter of audio from other folks radios while I’m trying to fly.  I like to hear my aircraft (and others) and all that chatter is distracting and irritates me after a while.  I also think it impedes communication with my fellow pilots as needed for safety so I love the blue tooth headset option afforded by the Android interface.

In order to make the audio usable, not annoy my fellow pilots and maintain safety I intend to use a single earpiece.  I bought the Sentry BT950 so I can use whichever ear I like… So far I like how it sits on my neck and audio seems plenty loud.  I have a couple other Bluetooth sets so I can try some others if need be but this one is a nice cheap option I can afford to leave in my flight case.

I also picked up an inexpensive blue tooth keyboard and mouse (Logitech model K380 and model M535, refurbished).  Both paired up and worked right off.  One oddity that was noted in some of the forums was apparent immediately.  When used in conjunction with the iX12, the enter key doesn’t function as you would expect.  So far the esc key seems to function in place of the enter key for text entry.  I’d bet there is an app that would remap the keys for me but I’m OK with using the esc key for this purpose.  The mouse works great and even has a “gesture” button that can be used to do swipes and such so you can pull up the various “side” menus etc… I’ve only used the mouse and keyboard a bit during setup of new aircraft but so far it seems like a great alternative to using the screen based keyboard to create all the text to speech prompts, timer call outs etc…  Do I need them to accomplish this?  No, but I like to have the option for anything that is going to require much typing.  I don’t even like to send long texts on my touch screen Android phone so having a keyboard is a nice option for me.   All my blue tooth hardware total cost me $70 and I will use some of it for other things so in my mind they are cheap at the price and nice to have options.

I routinely pull pictures directly from the web using the Chrome browser on the radio to use as my icons in the model selection screens and downloading the updates from google play is a nice and familiar way to operate so the ability to connect to a WiFi network directly from the radio is another nice to have option.  All in all, I like the radio so far.  There have been complaints about some issues (minor for me) like the audio level, slower model selection than other radios (30 seconds to change models versus maybe 5-10 on most radios) and the fact that it takes about 2.5 minutes to go from powered down to fully functional the first time you power up at the field.  This last is something you adapt to fairly quickly.  Just turn it on when you get to the flying site.  By the time you get a plane or two out, all is ready to go.  During the day, simply double tap the power button and go into sleep mode after each flight.  Coming back to full power up from there is a couple seconds.  The battery will last all day using this routine.

As I worked with the radio a bit there were a couple of additions I decided were worthwhile.  First, there is a company (Powerhobby) who sells vinyl wraps for the face of many transmitters including the iX12.  I have occasionally dropped something onto the face of my transmitters in the past and I thought maybe this might give it a bit of extra protection.   Also a little individuality never hurts… I already know of one other guy in the club who has an iX12 on order so now there won’t be any mistaking mine for his!  Installation of the vinyl was a bit tedious but not terribly so and I think the result is pretty nice.  Here is what mine looks like after the application. 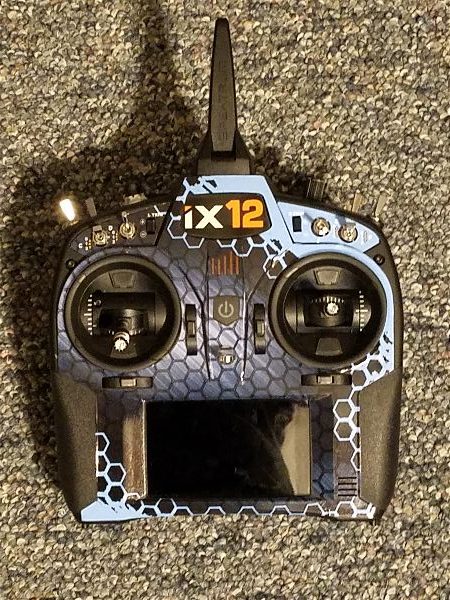 In addition I quickly noticed that the touch screen was going to often get greasy and spattered, etc… so I decided to take the leap and try to find a good screen protector.  I have not had great luck with the cheap plastic sheets you get for cell phones… they either mute the sensitivity of the screen, cause visibility issues, etc…  so I looked for a glass cover for this use and actually found one sold through Radiocontronics.  It is made of something marketed as “AirGlass” and is apparently from a company called Brotect.  I hesitated to spend ~$24 with shipping for what looks like a highly hyped piece of plastic cut to shape… but I have been pleasantly surprised.

Installation was pretty straight forward.  Clean with supplied lens cloth and carefully drop into place.  Done.  So far I have to say the screen is every bit as responsive as ever, there are zero bubbles or imperfections and so far it seems to pick up less dirt and finger “grease” than the screen itself did.  I wish it were just a millimeter or so bigger in both dimensions than it is… there is a very fine line around the screen that is visible if you know what to look for but is probably not noticeable to anyone else.  That aside though, I have to say it is working as advertised and if it keeps all those microfine scratches off my screen that my DX18 seemed to accumulate regularly (and it wasn’t even touchscreen) than I will be ecstatic.

At around the $600 mark, I think there is a lot to like in this radio.  And yes, I am a bit of a Spektrum fan for which I make no apologies.  I have worked with several other brands like Futaba, Hitec, Airtronics, Multiplex , Graupner and a couple others I can’t even recall.  All of them have some interesting features and strengths but it is hard to beat the Spektrum value for the dollar, excellent support and good balance of feature set with ease of programming.  The iX12 leans toward the more complex end of their line of radios so it may not be the ultimate answer for those who are not smartphone savvy or that are just happy with their DX7s or 9 or whatever but I think I’m going to enjoy it for quite some time.  At least until the iX12 Gen 2… or iX18 or whatever hits the market next!