I’ve been the owner of a 1/5th Scale Top Flite P-51 made up in “Redtail” colors for several years now.  If you want to see more on it there are several posts on it, just do a search for redtail or p-51 and you’ll find pictures and information on it.

Last year during a club outing I took her out for a flight or two and managed to stall it just feet from the runway.  The straight ahead stall from 4 feet or so caused the landing gear to catch the beans at the approach end of the runway and a fairly violent tail over nose tumble resulted.  Another main retract bending extraction from the wing, a punch in the bottom of the body just behind the cowl, along with the horizontal stab breaking loose on one side and cracking across the top of the tail was the result.  It was not pretty and it was just a case of not enough airspeed on approach… which I should know well but is easy to forget when you fly so many lighter, easier landing aircraft!

I was truly disgusted and tired of pouring money into this airplane.  It has not been a particularly fun or inexpensive airplane to fly and I began to wonder why I continued with it.  I can’t say I’ve ever gotten a great amount of enjoyment in flying it… It has pretty much zero of my top 3 most enjoyable attributes when it comes to RC aircraft.  It isn’t by any means an impressive flyer as far as it’s aerobatic capabilities, it isn’t easy to get flying or haul around, and it certainly isn’t low cost to fly either.  In fairness, I never expected it to be much more than what it is…  A complex, heavy, fast, expensive, nice looking and perhaps even impressive war bird!

I talked myself into putting it together and flying it partly just for the varied experience of doing so (check), as a nod to my flying buddy Tim (check), and just to have something that would be both impressive and welcome at war bird and giant scale meets (check).  The problem is that I just never really enjoy the way it flies… heavy and fast just aren’t my thing.  When I do fly it, I get simultaneously bored with the way it flies and apprehensive since it never flies for long without something needing fixing, adjusted, etc… and often the cost of those repairs just isn’t top of my list so flights are to far apart to ever get totally comfortable with it.

So after the last crash I wasn’t sure I was ever going to get it flying again.  It sat over on the side bench for months without my giving it more than a glance and a frown.  Several times I had decided to just part it out and or maybe just clean out the expensive bits and do some work to make into a display only airplane with a dummy engine, etc…  Finally, I started thinking (maybe it’s just loss of memory and old age) that maybe I could make it fly a bit better and take some of the complexity out of it to make it a bit more reliable??  There are still occasional events I’d like to take it to.  Of course that means making it flyable again… without breaking the bank either!

So here is the plan.  First, I’ve started working on repairing the damage to the tail and done at least a little cleanup and analysis of the landing gear mounting area.  I expect to be able to patch it up with a moderate effort and very little expense.  Here are some shots of the repairs in process.  Gorilla glue is wonderful thing.

This is the bottom of the horizontal which had separated from the body along the glue line. 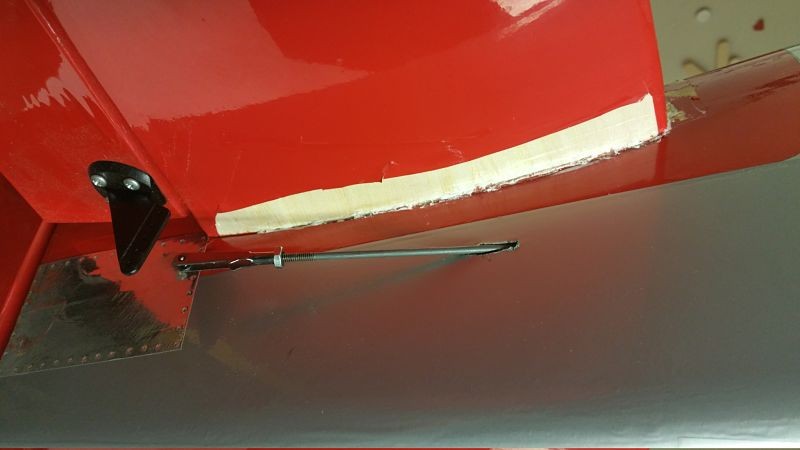 This is the point where the wood cracked and broke across the top of the tail…  It was one continuous crack/break from that bottom area above all the way across.  This allowed the horizontal to “flex” approximately 2″ up at the tip of the horizontal/elevator!! 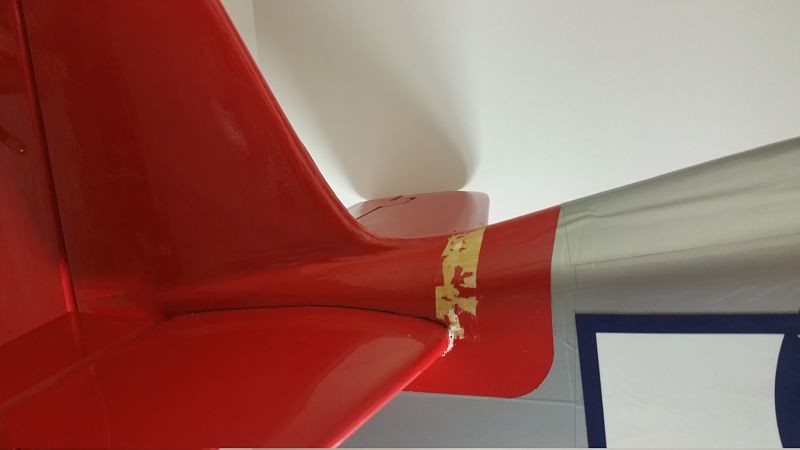 In addition, one of the main landing gears is toast…  Apparently ripping the retract assembly out of the wing, tearing out chunks of wood, shearing the self tapping screws and bending the assembly followed by attempting to pull the retract controller (which is roughly the size of deck of cards) by the wires out of the wing via a quarter size hole… is a bit hard on the electric motor in the retract!!  For some reason it doesn’t work anymore!!  I guess Robart just doesn’t expect that sort of thing when they build these… go figure.  So there will be no more retracts!

So if I get out of the retract business and patch together the wing damage, I can avoid spending about $300 and shave off some ounces.  Leaving the controller and both the main retracts behind looks like it will save me about half a pound.  While I’m at it, I’m going to pull all of the telemetry.  I have enough info from the flights I’ve made that I know pretty much everything I wanted to about how it flies.  I may even spend a few dollars to go to two smaller main flight packs (I can reuse the larger packs that are in this airplane elsewhere).  If I can manage to trim a full pound out of this bird I wonder just how much better it might fly!?

Here are the completed repairs at the tail with it all buttoned back up. 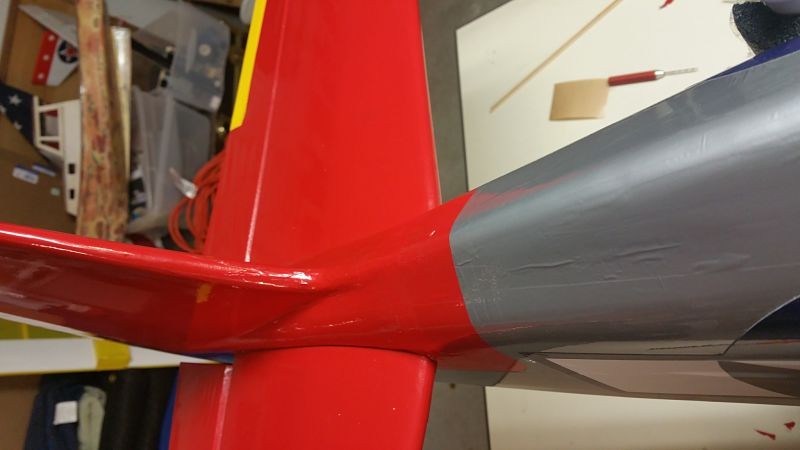 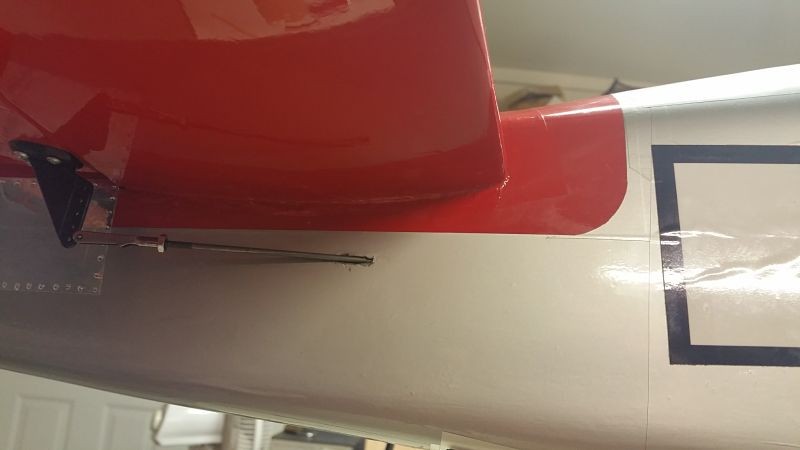 It seems strong enough.  More to come as this is getting done a bit faster than I first supposed.