I’ve been spending a bit more time working on the replacement wing for my Giant Scale P-51 Red Tail Mustang.  After cutting out the covering appropriately and recovering the tips in red and adding the yellow stripes I started working on linkages.  When I went to attach the control horn to the port side aileron I discovered that there was no hardwood mounting plate on the bottom of the aileron to mount to.  Of course I did so by drilling a hole and then realizing the drill went in far to easily!  Stopping to consider I realized there was an appropriate right and left aileron and I assumed I had picked up the wrong one…  (please imagine appropriate cursing as I realized I had already applied the small red and larger yellow material to the tip of what I imagined was the “wrong” aileron, not to mention the new hole I had just drilled)

I then went to retrieve the other aileron and quickly determined that it was an exact replica of the one I had already worked on…. not good.  As you may have figured out for yourself by now, they should NOT be duplicates.  In particular the port side aileron should have a hardwood plate in the appropriate spot to mount the control horn (close to the inboard end of the surface on the bottom).  The starboard side aileron would have a similar plate but because these surfaces are tapered the two are mirror images, not duplicates.  What happened, it appears is that I have two ailerons that would both work on the starboard side but not the port side.  Here is a picture of the two ailerons side by side (you can see the half-circle hardwood plate through the material if you look closely). 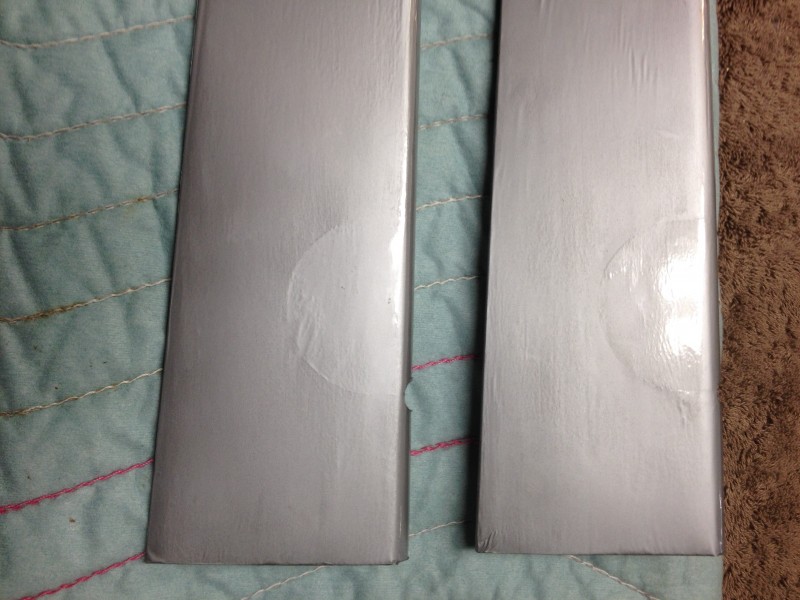 I double checked the flaps and they are fine but the ailerons I have are not.  Either the plate was simply installed on the wrong side or I have two starboard ailerons.

Not caring for the option of calling the hobby shop and/or Top Flite with the inevitable delays that would ensue before they came up with a replacement part, I decided I needed to correct this issue.  Don’t get me wrong; they are all good folks and I feel confident they would do all they could to help resolve the issue but what are the chances they have an extra port side aileron laying around?  It took months to get the replacement wing the first time.  The balsa is certainly not going to be sufficient to hold the control horn screws securely for this big heavy bird so some surgery was in order.  It was time for the “modeling” part of the hobby!

I located a small piece of 3/16″ aircraft ply from another project and cut a nice square out.  I noticed my old wing used square insert and the new one uses the half circles so I figure either works as well and I can cut squares easier than circles!  I then cut away the covering material around the area I had to work on and used the ply square as a template to mark the surface.  Using an X-acto knife I cut around the block and then carved away balsa until I could fit the ply block in place. 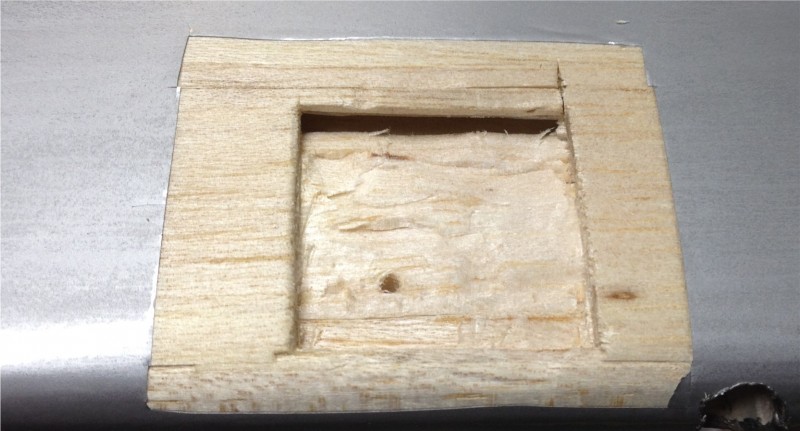 Once satisfied with the fit I mixed up some 15 minute epoxy and coated every surface that would have contact with the new block with epoxy.  Once in place I wiped the excess epoxy off with alcohol and set the piece aside to dry.  With some minimal sanding and a bit of patchwork covering I should be able to get back to making some progress tomorrow!  Here’s the repair awaiting some recovering work.

One lesson to take from all this is to keep the ailerons,flaps and whatever other parts of your ARF came partly assembled or packed together… together.  If the ailerons had been correct I still might have picked up the wrong one and run into this same issue.  Marking them might be a good idea if you are going to be disassembling and reassembling things.

I wonder if somewhere out there is someone with two starboard side ailerons on their Giant Scale P-51??