Last weekend I managed to get out and put some flights on the 1500mm FMS P-47 Bonnie…  The short version is “very nice”!  Here “we” are after a couple of flights. 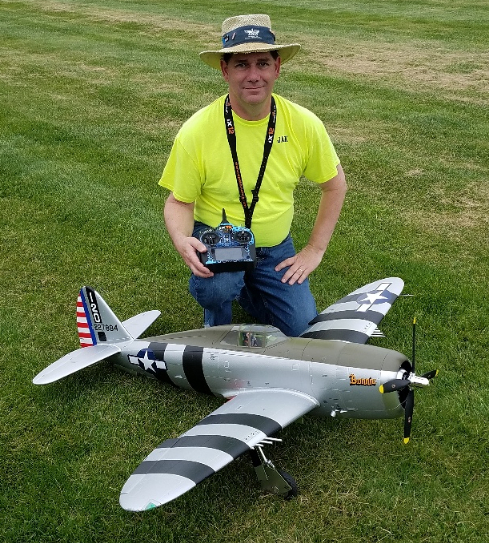 I’ve always had a soft spot in my heart for the mighty Jug for a couple of reasons.  The P-47 is a workman like craft.  She’s big and heavy, not the sexiest but she is powerful, deadly and protects her pilot.  P-47s were built in two places and one of them was the plant in Evansville, IN where my grandfather (mother’s side of the family) helped to build them!  There are family photos from the plant (which later became a Whirlpool plant that created lots of consumer appliances) showing gun testing going on in the middle of the night using tracers!   This was a 24×7 operation so darkness could not halt the process.  I can’t imagine living nearby and listening to those 8 .50 caliber machine guns going off at 2AM!  Just another hardship of war I suppose.  Most of those families probably had folks working in the plant and so understood well what was at stake.   In honor of grandpa, I added one customer graphic, making him the crew chief on my P-47.  His name was Jesse A. Lane. 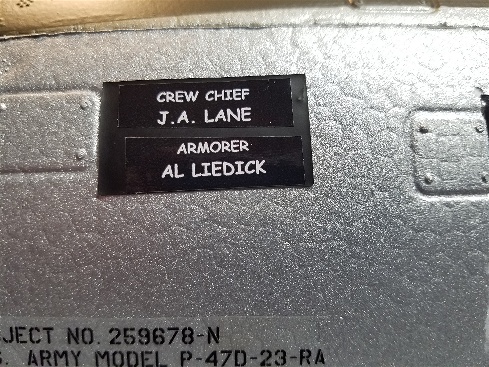 With Grandpa taking care of the mechanicals, I got in a total of 5 flights that day and the plane performed well.  She has a wide flight envelope from nice and slow to fairly impressive high speed passes.  She kept up with an EDF that happened to be in the air during one of the flights and at the same time slowed down nicely with medium flap settings.  Gentle/slow landings combined with the ability to fly the plane fast enough to be convincing (a fighter should not spend a lot of time just floating along should it?).  This is a somewhat rare and welcome for a war bird and gives me hope that I will fly this more than “once in a while” as it makes the plane actually enjoyable to fly versus flying like a kite or white knuckle landings being the norm.

I still have some tuning to do… need to adjust the elevator to flap mixing and adjust my throws and expo settings to my liking.  Also need to double check that motor box “flexibility” that I noted in my first post on this airplane.  I may have imagined it, or it may just be a result of the down thrust built into the airplane, but it seemed as if the plane would push downward with application of full throttle.  Not a drastic issue and perhaps if I can firm up that motor box this would go away??  We shall see.

Overall, I am very happy with the flight characteristics and overall performance of this airplane.  It is the first war bird I’ve bought that I am looking forward to flying frequently in the near future.

From a non-flying perspective I did my usual cut outs from a styrofoam cooler and created a cradle and I purchased some wing bags to protect the soft foam, guns, etc…  That works well as long as you actually tie the cradle down in the trailer!

The soft foam continues to be a concern so continued care is necessary but so far I’ve managed to keep bumps and bruises to a minimum.  Also, the wing connectors are holding up so far but I only have a dozen connects and disconnects on them so far so will have to watch those as well.  It’s also worth mentioning that the retracts have performed flawlessly up to now.  I attribute part of that to the fact that she lands pretty easily so they aren’t getting the abuse that a heavier bird would put on them.

Overall I am very happy with this aircraft.  FMS seems to have done a great job and I recommend you get one for yourself if you are so inclined.

One Reply to “P-47 Bonnie gets some flights”