I have taken to doing some indoor flying over the past couple of winter seasons as the bitter cold and snow of Indiana this time of year is not particularly conducive to just hanging out at the field.  It’s a lot of fun, but is yet another specialized endeavor within RC which means there is some specialized gear available to help you get the most out of your time spent.  I.E. More toys!!

For instance, most of the small indoor aircraft use a single cell LiPo in the 30-200mah range and tend to eat up those precious little milli-amps in a short 4-8 minute flight.  That means over the course of a 3 hour indoor session you can run down a BUNCH of batteries.  I tend to take some pictures, talk with the other pilots about their aircraft and find other ways to distract myself for much of the time but I can still run short of charged batteries in a hurry.  This is especially true when flying a little quad that can use up a battery in 4 minutes.  Along with buying ever more batteries, I’m doing a fair amount of recharging at the gym.

At first, just using the single chargers that come with many of these airplanes was OK, but those chargers can be slow, are sometimes bulky and they either have to plug-in to an AC outlet or run off AA batteries depending on the whim of the manufacturer.  It’s easy to end up with nearly dead AAs inside those chargers at the worst time and there is never enough space on my 2 wheel cart going in and out of the gym so my array of 4 single cell chargers (powered by 16 rechargable AAs) had to go!

At first my solution was simple.  I have a couple of buddies who each have one of the Thunder Power Quad Port AC/DC chargers.  I would just borrow a charge port or two from my flying buddies!!  This works alright and they don’t mind sharing (not much anyway) but there were never enough charge slots available and I was hoping for something a bit better.  I tried to drop hints that those guys needed to upgrade their chargers but I’m the gadget guy of the bunch… I like buttons and switches (if they serve a purpose) and they were happy with the simplistic but effective little Thunder Power.  Here is the little TP with a link to see it on Amazon.

After a little research on the web, I decided to pick up the Hitec X4 Micro.  At a bit over $50 it’s a bit more expensive than the TP but it has several nice features. 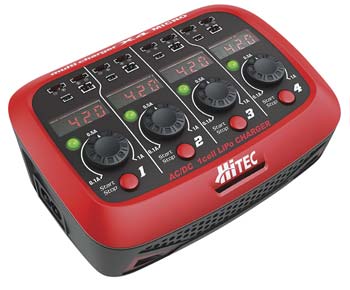 The Hitec can not only charge 4 batteries simultaneously at anything from .1 to 1 A rates, but it has a separate LED display for each of the four charge circuits so you can tell what is going on with all 4 with a glance.  To charge just plug in to any of the 4 sockets as appropriate for your battery connector type, dial up the rate you’d like to charge and push down and hold the red start/stop button for a few  seconds (until the led lights solid and you hear a longer beep) and you are charging.  If you just momentarily tap the button before charging you will be shown the current cell voltage (and hear a short beep).  During charging the display sequences through showing you the current charge rate, the current cell voltage and the amount of charge taken (in ma).  When the charge is complete you are treated to a green light along with a series of 5 beeps and the word FULL on the screen.  This alone may be worth the price of admission for some.  One of my flying buddies is effectively red/green color blind so you can imagine that seeing FULL displayed might be more helpful for him than just a red or green LED.  With FULL displayed you can tap the button again and get a cycling display showing the end voltage, the total milliamps provided to the battery during the charge cycle and the FULL display.  With AC or DC input options, along with an AC cord and DC connection with alligator clips all supplied, this little charger is at home and ready to work on the bench or at the gym.

While the Thunder Power is a fine little charger (and it is much smaller than the Hitec which can be an important plot point) it can’t compete in my mind because of what for me are the two big pluses afforded by the Hitec.  First is the array of information available to me when using the Hitec.  The TP just tells me charged or not via the red/green LED.  The Hitec keeps me informed from start to finish. Secondly is the ability to control the charge rate.  This is handy in both protecting my batteries from being “beat up” by a to high charge rate and to take advantage of faster charge rates when I want to based on the capability of the battery under charge.  Most of the little 1 cell chargers do so at a fixed rate… in the case of the TP for instance .3A… period.  Want to charge your 30mah cell?  Hope it likes to charge at 10C cause that is what it is going to get.  Fast but brutal!!  How about your 200mah?  You guessed it, .3A and I hope you aren’t in a big hurry cause it’s going to take 40 minutes or so.  Don’t get me wrong, chargers like the TP are fairly inexpensive (Around $35 at the moment) and work pretty well for most applications, but I like to have more control over the charge process and know a little more about what is taking place.  With the Hitec I can charge my 150mah E-Flite at it’s max charge rate of 3C (450ma) for a quick 20 minute charge when I really want to get back in the air fast but when the session is over and I’m back on the bench getting things ready for the next fly, I can just as easily drop down to a leisurely 150ma 1 hour charge.

I will say that the Hitec does require you understand a bit more of what you are doing in order to be used correctly.  You have to pay attention and set the charge current accurately to get maximum benefit from the box (easy to do with the display and just a little knowledge).  In my book that’s just another part of the hobby and one I enjoy actually so this is my kind of tool and for $50 I think the price is reasonable.

The other price you pay for the extra features of the Hitec is a little bit of bulk.  The Hitec is pretty compact for what it can do (especially for an AC or DC unit) but your not going to stick it in your shirt pocket either.  Still compared to the single cell units I was using this will take up the same space as one, and do the work of 4 so all in all I expect this thing is going to work out well for the intended job.  I’ll update as I get more experience if anything changes my mind but at the moment I’m thinking the Hitec X4 Micro is a keeper.