This is a photo I took at the 2013 Joe Nall.  To me, it expresses pretty well what the whole event is about. 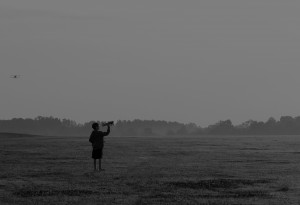 Its about 7 AM as the sun is up over the tress.  Dew is heavy on the grass and an early morning fog is trying to burn off.  It’s a hazy but cool early morning in rural South Carolina.  Maybe 60 degrees now, but the air is heavy with moisture and it is definitely on its way to 85 and sunny later on.  Things are relatively quiet with just a few RC planes cruising in the haze.  Most folks are sitting around their camp sites planning the day and having some breakfast.  Looking out from my campsite situated just north of the Electric flight line… this is what the morning looks like.  A young man about to get his first flight of the day is almost silhouetted against the bright morning sky.  From the main flight line to my North a large gas powered biplane passes overhead.  The start of another beautiful day at “The Nall”.