I’ve been saying for a couple years that I would eventually like to do away with all of my glow power in favor of either Electric or Gas.  With gasoline being so much more affordable than glow fuel and more and more gas powered options becoming available in smaller displacements, I started divesting myself of all my 1.20 and up glow engines and installing DLE-20s or something similar.  For the smaller stuff, economical options for electric power in the smaller aircraft have also become available as battery technology particularly seems to have jumped forward.  For me the sweet spot for glow power had shrunk to .46-.90 size engines only.  Anything else and I was looking for Electric or Gas power options for sure.

Recently I bought the Carbon Z Cub and after a few flights I realized that it might be time to once again look at what electric options were available for my remaining glow fleet.  It’s power system is pulling an 8 lb airplane with enough power to provide unlimited vertical (1250+ Watts when running at the absolute max) and since I was going to be buying a few 6S LiPo packs in support of that aircraft anyway I thought if I could find a good alternative using those same packs it might be time to replace a few more glow power plants.

One of my old reliables in my glow fleet is my Telemaster 40.  My Telemaster is probably 10 years old and has gone through 2 or 3 engine swaps and 2 different covering schemes.  It is currently configured as a tail dragger with a Saito .82 four stroke for power which would seem to be in the same category of power as the Carbon Cub and is far lighter (~5.5lbs), even with floats attached(~7lbs).  This aircraft with the Saito makes a great float plane, drop box hauler, glider carrier and sometimes just fun to fly light weight trainer.  It is currently covered in Wonder Bread inspired white with colored spots and is always a big hit with the kids as a result.

The Telemaster’s horizontal stabilizer is a full airfoil design which makes it quite different to fly from most other trainers, handling much more like a cub than a trainer when it comes to takeoffs, landings and turns (rudder coordination is highly recommended).  I like to think it is my skilled craftsmanship (she started out as a box of sticks, two plan sheets and 4 pages or so of small print) that makes this thing such a versatile and fun aircraft to fly but I’ve seen the ARF version and it flies great too!

After a bit of research I decided that is should be possible to swap out the Saito for a new motor and speed controller without spending a whole lot of money (assuming I can sell the Saito to offset some of the cost) and losing little or nothing as far as performance goes.  In fact, most of the power options using the 6 cell LiPo batteries are likely going to be on the high side of what the .82 produces based on the research I did.  It also looks like the weight of the aircraft should remain nearly constant if I keep the battery capacity in the 3000-3500mah range.

To start with I did a ton of reading, comparing specs and calculating to find out which motor and speed controller combinations made sense.  I also looked for something that might be a good fit for my .90 size AeroWorks Extra 260 while I was at it.  The Telemaster needs a healthy power plant to handle all the “extras” I ask of it… so something with just a bit more capability than the CZ Cub has (besides I’d like to have a bit more headroom as the cub can actually draw the rated max from the provided speed controller) maybe 1400 watts or so would be a nice target… Hopefully I can continue to enjoy nice long flights when I’m just poking around but still have plenty of authority when pulling up off the pond or hauling my skydiver up for another drop.  Just a bit higher would even be enough to pull the Extra 260.  It’s in the 7-7.5lb range so I’d like to have 1600 watts or so on it.  With the right choices maybe I could share batteries and run a similar speed controller even if I have to upscale a bit on the motor itself.

Keeping in mind that I wanted to use my 6 cell batteries (My battery selection right now skips from about 2200mah 3S batteries to 6S 3200s!) and limiting myself to mostly what I can get through my local hobby stores, I came up with a couple of interesting options and decided to look at the Rimfire .80.  My Saito turns a 14×7 with a lot of torque up to just under 8000 RPM if I recall correctly and the Rimfire calls for something in the 15×6,14×8,15×7,15×8 range and at 500KV on 6S I would expect something in the same range of RPMs… so it shouldn’t be any less capable with the new power system.  Also, per the wattage, KV and Prop specifications, this appears like it will be a close match to what the Carbon Z power system does and with only a bit less wing and quite a bit less weight I would again expect to have some fairly “peppy” performance on the Telemaster.  Checking weight, etc… and everything looked to be in the ballpark so I had the hobby shop order the motor and speed controller and started to work on the air frame.

Getting started involved pulling the motor, fuel tank and all the rest from the Telemaster and getting an idea how much weight I was stripping out.  If things worked out well, I could install the new power system without adding much weight.  The last thing I wanted was to end up with a porky Telemaster.

Here is a selection of the items that will no longer be needed. 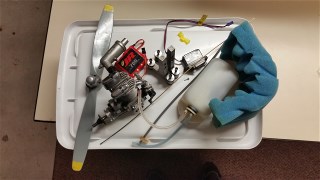 All told this stuff weighed in at 2 and 1/4lbs and I have since found a few other odds and ends I will no longer need.  Even with a fairly hefty/large capacity battery I think I can keep the overall weight close which bodes well for the project.  While I’m at it, I’m stripping her down to make it easy to install the new gear and make the necessary mods to install the electric power plant.  I’ll post some more as the project progresses.