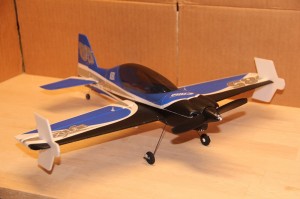 My Sbach – A fast but stable aerobat thanks to AS3X

I’ve had the little E-flight AS3X equipped Sbach for a couple months now and the first thing I’ll say is it isn’t what I’d consider a great indoor plane. It seems to fly better fast and I personally don’t enjoy spending all my time just “missing the walls”! However the stabilization system really makes it fly more like a larger model… Maybe akin to what you’d expect from a 40-60 power model. It’s quite impressive. Though I’m not much of a 3D enthusiast I have been trying out hovering a bit with it and it seems to be doable as power is not a problem.

As an outdoor airplane it flys very well with sustained knife edge, (use the side force generators from the beginning) crisp feeling 4 point rolls, loops small or large, stall turns, snaps and more within its repertoire. Landing takes a bit of work as it needs to carry a bit of speed for anything resembling a normal landing. The best thing is it can do all that in 10 to perhaps 15 mph winds if you remember to correct your flight line with judicious use of rudder! That’s impressive for a sub 3 ounce aircraft.

All in all, I enjoy the little Sbach. While the AS3X system does make for some seeming “resistance” to smaller control inputs, it also makes the plane track great even in high winds that other micros can’t handle. Flights don’t seem to be to short so the little 180 mah battery seems to be about right. It’s unfortunate it has a different connector than anything else I’ve owned before, there is a little adapter cable from horizon that adapts it to most balancing chargers so if you don’t get the model with the charger or want another option there is a fix out there.