So normally a Geo textile runway has little to do with a trip to attend the twice-annual float fly at Lake Lemon, just North of Bloomington, IN.  But in this case, the outing was dual purpose.  Let me explain.

There has been an ongoing discussion at my “home” RC club about the possibility of putting down a Geotex runway at our field.  As usual with any group of humans, opinions vary widely on the topic from complacent acceptance of whatever is under the wheels… to those who think laying down some fabric on a small portion of the runway is going to destroy civilization as we know it… to those who think it would be a great addition to the field and are anxiously awaiting the installation!  I will admit to being a proponent of giving it a try but I’m not predicting it will be the ultimate solution for everyone that some seem to be hoping for.

“So how does this relate to a float fly?” you are probably asking yourself at this point.  The answer is that the folks that are running the float fly are members of the Monroe County RC Club and they have had a Geotex runway for 2 years now.  Since I was definitely planning on attending the float fly anyway and wanted to get a first person look at the surface I sent out an email to the MCRCC officers and explained that I intended to come down to the float fly and wondered if they would mind if I and a few buddies stopped by the MCRCC club field and did a little examination and flying from their runway.  I quickly got a couple of very welcoming emails giving permission for our visit so I gathered up some interested fellow RCers and planned our trip.

Surprisingly 2 of the party of 5 didn’t even plan on flying at the float fly!  They just wanted to see the runway and I guess figured watching us crazy people flying RC planes off of water was just a bonus! 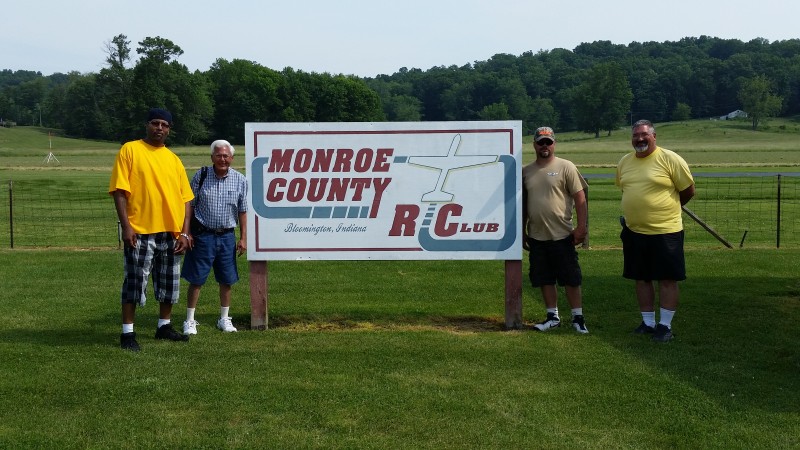 Here’s the visitors…. from L to R.  Martin Hooks, George Horning, Corey Lucas, Steve Woods and I was behind the camera.

So here is a quick rundown of the runway…

The installed fabric sits at a level just slightly below the grass which resulted in a very smooth roll from the grass to and from the material.  The Geotex runway at MCRCC is about 29′ x 150′ which was very adequate for small electrics and glow up to 40-60 size based on our trial flights.  We flew the micro T28 from ParkZone, it’s bigger (42″) brother, the FlyZone Beaver of a similar size, a glow powered Revolver and finally did taxi only tests with my 50cc powered Wildhare Slick.  It was not ready for flight that day but taxi tests from just rolling to tail off the ground running on the mains was sufficient for what we had in mind.  The observations of the group were mostly positive.  The runway seemed to be a bit bumpy for the smaller aircraft (we were later told it had not been rolled yet this year but can be, and probably will be soon).  My feeling is that I could wish for something a bit longer and maybe a bit wider to allow for “cheating” into the wind when it is inevitably not aligned with the runway… but it was adequate as is.  Otherwise, other than getting used to taxiing on a “smooth” surface, it was especially nice for the smaller aircraft.  Aircraft like the micro T28s that just can’t take off from our grass runway at all, and the larger T28 that with stock gear is more likely to flip over than roll out on landing at our field, were certainly in their element on this surface.

The most informative part of the visit though was when we moved onto the float fly site and met and discussed the runway material with several MCRCC members.  I have been a bit skeptical that we might need to do some grading to lay down our own Geo textile runway but they did little or no such work at MCRCC.  With only roundup and “scalp” level mowing they have had no issues with laying the material down over what they had and have had no issue with it coming up, erosion, wind or whatever.  Apparently even when overrun with flood waters a couple feet deep the material stayed put with just the standard staples holding it in place!  They also related that they had been through a very contentious process and that the vote to lay down the material had passed by a mere two votes!  One gentleman was kind enough to relate that he had been a very vocal opponent of the project but was now a convert and was very happy that he had stood up at a later meeting to say that he was wrong and that he now enjoys the Geotext runway as much as anyone.  We have some very strongly opposed folks at our club as well but after visiting with these folks and bringing up all of the objections I had heard from our own members, I was left with the feeling that none of those concerns are really valid based on the experience of these folks.

According to the folks present, the runway is now a big hit with almost every member with some of the (previously) most adamantly opposed now enjoying the benefits.  The visit helped allay my own fears that we might be wasting money on something that would need a lot of maintenance or might not work well over our (perhaps rougher) surface.  It is certainly not a done deal that we will move forward with the project, but I feel pretty good that the cost to do it this way is low and even a failure will just result in a need to roll it all up and reseed… If we are successful, it seems like we might even attract more of the small electrics/park flyer crowd and open up some new options for our members including more retractable gear aircraft.  There was a lot more conversation about things like how to repair damage, rolling, re-inserting staples that push up… etc… but the general tone was that they had found that most of these issues are easily handled.

Moving on to the float fly, it was fairly breezy with some swirling air making the flying a little more “bouncy” but really not bad.  I suspect the wind direction (quartering from behind us as we stood looking out at the lake) worked to our advantage since the large hill behind us did much to block the wind.  I flew the Carbon Cub through 4 batteries with nothing untoward occurring and did some prop hanging and aerobatics to the applause of some nearby “party barge” occupants that were hanging about a hundred yards or so off shore.  Landing with the wind gusting and waves to play with was really fun.  With the reliability of the electric power plant and the nimbleness of my AS3Xless Carbon Cub allowing for some sweet splash and goes, spot landings and long wave-top hopping skims it was hard to wipe the grin off my face during and after each flight.  I also flew the Flyzone Tidewater which handled the waves and taxi duties great but was a handful in the air with a continuing tendency to dive as throttle is applied.  I later figured out the engine pod was leaning forward with increased throttle and did some repairs to help reinforce it.  I have since flown it a bit more off grass and it greatly improved and so I am looking forward to a future float fly to give it some more air time.

Corey flew his Beaver on at least 2 occasions and Steve was able to get a good flight in on his cub after some early issues were resolved.  Martin flew his Quad a bit and captured this image showing my Carbon Cub on a landing approach. 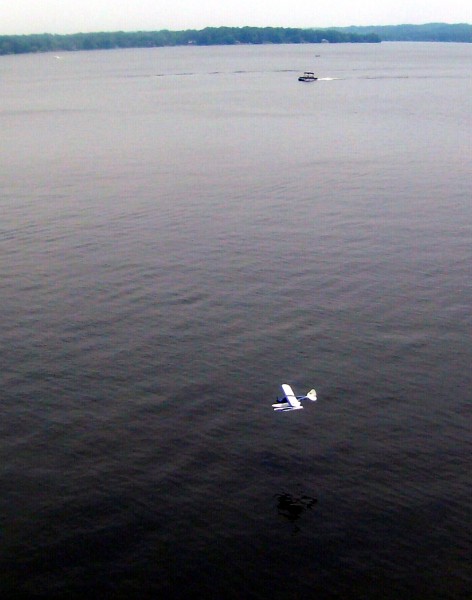 I’m pretty sure everyone enjoyed the day immensely and I for one am looking forward to (fingers crossed) a successful Geo Textile runway install AND another visit to the fall edition of the MCRCC float fly event at Lake Lemon.  Thanks so much to the officers and members of Monroe County RC Club who allowed us to visit their field and participate in their event.