I have recently been exploring the Spektrum telemetry system a bit.  I have fairly full house Telemetry install in my 50cc size Mustang but it has limited flight time at this point and getting it out in the snow wasn’t feasible so I started with a smaller testbed to do a little experimentation.

I installed a TM1000 Telemetry receiver into my Parkzone Radian glider.  I had recently replaced the original receiver in that bird with one of the new, low cost 4 channel DSMx receivers which just so happens to be telemetry compatible so by just running the standard wiring from the data/bind port on the receiver to the TM1000 I had a working system.  I then added the Altimeter sensor and created a little wiring harness to tap into the balance plug on the 11.1V, 1300mah LiPo flight pack and I had access to a fair amount of information.  I could see fades, frame loss and hold on each antenna as well as receiver voltage and the pack voltage plus the altitude.  I went out to my test area (known as the side yard) and made a short glider flight.  Here is what the display on my iPad looked like when I downloaded the data afterwords.  The red line is the battery voltage (note the drop in voltage when I was climbing/running the motor).  Green is altitude. 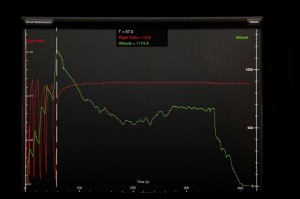 While examining the data after the fact on the iPad was interesting and informative the best part was what the system allowed me to accomplish while I was flying.  During the flight I had the display up on my DX8 showing altitude and while having the motor shut down was able to get into some lift that I believe was coming off a neighbors roof heated by the sun.  I noticed a bobble that I thought might indicate some lift but couldn’t tell whether I was getting into a lift area or not… the bird was already at 500+ feet altitude and a couple hundred yards away at the time and I just couldn’t tell visually whether I was gaining altitude or not.  By peeking at the display from time to time and circling around the suspect area I was able to figure out when and where I was gaining altitude and was able to verify where to position the Radian to gain some altitude.  I spent about a minute continually peeking at the altimeter readout and circling back to the lift area and gained about 150′.  While I’m sure others could do much better and probably do so without any need for instrumentation, for me this was ground breaking stuff.  It was the first truly useful example of what these tools can add to the game that I’ve seen and it convinced me that adding telemetry could give me more than just some cool factor!  I’m already thinking about other ways to make use of some of the other available Spektrum Telemetry sensors.

Next time I’ll talk about my first experiment with the GPS sensor at our New Years day “freeze fly”.