Well, the Beaver is ready for a preliminary flight.  Assembly is done with the exception of some thread lock on a few of the control surface adjustment screws. 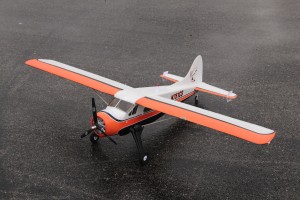 To get to this point I went through the instruction manual and completed all the appropriate steps and other than some slight issues with the order of steps it was all pretty clear. For some reason, Flyzone thought it better to attach the tail wheel before installing the horizontal and vertical stab (which is all one process) and that just puts the wheel in the way so I took it back off as I was fiddling with getting the tail attachment done and then reinstalled it afterword.  It’s not a big issue either way.  I did appreciate that the instructions leave attaching the prop as the very last step which is always a good idea for electrics, which are always dangerous once the prop is installed.  Electrics are like safely handling a firearm… assume it’s always “loaded” or ready to spin the prop and you are a lot less likely to get hurt.

I stripped the windshield off (it looked ready to eject at any moment out of the box anyway, held on with only 6 little dots of glue) and used that access to make some of the build steps a bit easier.  Also, since I have no plans to ever remove the wings again I went ahead and spot glued the aileron/flap/lighting wires down so they were not dangling down and visible in the windows of the Beaver. I left the reattachment ’till the very last thing so I could more easily get to my receiver which now resides in the front seats.  I added a little dark foam over the top of it so that it’s not very visible and reasonably secure.

I did trim one of the wing struts to match the length of the other.  This involved removing the screw and end piece from the tube.  Re-drilling the screw hole for the end piece to attach to the spar tube and reattaching.  This was not particularly difficult but I wonder how/why they are different lengths to start with.  Even after that the wings don’t seem to be perfectly level with the horizontal stab but there doesn’t seem to be an adjustment method mentioned or provided for.  I will likely try some shim washers at the spar attachment point on the bottom of the wing to see if I can force the wing to level.  It’s not bad but straight planes just fly better so I’ll give it try.

I can’t recall ever finishing a plane and flying it exactly according the manual and the Beaver will not be an exception.  Here are the things that I changed prior to being deemed first flight ready:

Of course by the time I stuffed the large receiver (and 1 remote) and the e-switch into the bird it simply wouldn’t easily fit in the compartment up front so I moved the receiver to the front seat area as noted before.

That puts the Beaver in a “ready for maiden flight” status at this point.  Maybe later today if not a bit later this week she will venture into the sky.  Once I get a flight or two, I will go back and thread lock the various EZ connectors that hold the flight surfaces.  I’ve never been fond of these for primary flight controls but for this little plane I will try to live with them.  Next update should be a flight report and/or the float assembly and installation.  Hoping to be fully ready and tested out on floats before Joe Nall 2013 in May.