After considering my options for  awhile I finally decided that I was not willing to continue to run my Laser’s power system with the Castle speed controller reporting the FET hitting 180 degrees or so and the total wattage showing peaks near 4100 watts from a system designed for 3500.  Castle advised that the speed controller might shut down around the 210 degree point so I have a little margin to work with but pulling a bit less power would hopefully cool things down, plus bring that top wattage down a bit which would hopefully also translate to a little more flight time and less strain on the batteries so…

First step was to hopefully reroute and improve airflow a bit.  The motor box in the Laser is as much open space as structure so there is a lot of air passing through over the batteries directly from the cowl openings to each side of the nose cone… but below where the speed controller sits may not be getting as much since it is not “in line” with those openings.  To help with this I taped off  the side openings of the motor box to hopefully force more air to pass underneath and over the heat sink of the speed controller.  I also re-routed my battery tie downs (Velcro strips) so that they were not covering any of the fins.

This seemed to have negligible impact so I decided the next logical step was to reduce prop load slightly.  The 22×8 flew awesome but the 20×8 dropped the speed controller temp by 50 degrees or so and the bird still had good power and dropped the battery draw markedly.  But of course I wanted more power!  The only place to go was in between and having already bought 4 props I decided it was time to do some “custom” trimming.

I first marked the tips of the 22×8 about a half inch off of each and then powered up the desktop sander and started making the new 21×8 custom Xoar prop.  I tried to maintain the basic tip shape and hand sanded the last bits to round edges and smooth things up.  I then applied some clear finger nail polish a sealer to the bare wood.

After a little drying time, I put the prop on the balancer and did a quick balance job and then bolted it back on.  Here is a before and after sample of flight data showing wattage, amps and temperature of the speed controller.  First the 22×8 stock prop.

You can see the temp of the FET nears 180 degrees (the gray line) and the wattage peaks over 4100 watts (the red line).  Note the current at almost 96 amps.

And now with the modified prop… 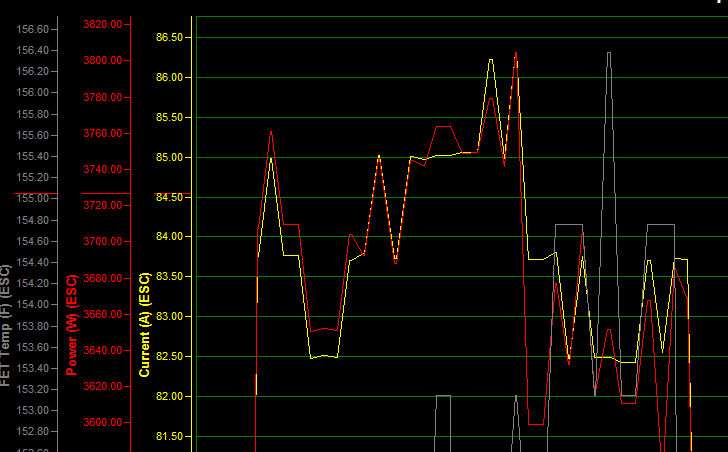 In this graph the temp peaks at just over 155 degrees Fahrenheit (gray) and the wattage now peaks at about 3800 very briefly (the red line).   Amps drawn peak around 86 (in yellow).

Even dropping back on power a bit, the plane has huge power… straight up snaps?  No problem.  Knife edge loops?  Sure!  Straight up out of a hover?  Piece of cake.  So I think this is it.  The prop of choice will be a Xoar 21×8, either cut down from a 22×8 or direct from the factory.

Now I can concentrate on airplane setup including battery position for best balance, mixing needed, etc…  Now I just need about 50 flights !