Well, I’m up to date reading the discussion thread on the Carbon Cub and there has been a fair amount of discussion about a suitable replacement prop to use in conjunction with the stock motor.  Some have continued to run just the stock prop while others have branched out to (most commonly) the nearest APC equivalent.  A few folks have actually measured the current draw using the stock prop or the APC 15x6E but I only recall one who did a side by side comparison of the two props current draw.   The results seemed intuitive… more current from a higher pitch prop… but the difference seemed incredible and I was wondering how much more thrust must be produced considering the reported 10A delta!  10A more current at (just a guess) 20V is 200W of power!  That’s in the neighborhood of 20%!!  Based on my experience with similar sized planes with glow and gas engines 20% is huge.  I decided I had to do my own test and measure not only current but thrust as well.

The BL50 stock motor with the stock propeller and a fully charged 6S Lipo seems to draw somewhere between 56-63 Amps in my own tests and that jives with readings reported by others.  Of course there will always be some variance between batteries (internal resistance/C ratings), connector losses, etc… Plus the measuring equipment we are using is not exactly lab grade but there have been plenty of tests reported that fall predominately within this range.

Based on that data alone, there have been several that have stated that putting the 15×6 APC E on this setup is to invite disaster as the higher pitch prop will draw more current and the stock ESC is only rated at 60A continuous (ignore for the moment that the ESC is rated for 15 second peaks to 75A).  That one older post that compares the two even showed a video clip of a current measurement using the APC and topping out at 66A compared to 56A for the stock prop.   I have been in the hobby long enough to realize that comparing props across brand is perilous as the blade shapes, thickness, stiffness, taper, etc… are different across product lines and this can have pronounced affects on the performance of a propeller but a .5″ pitch change (pitch has much less affect on the loading of a motor than does diameter) to have this big an effect seemed unlikely.

With this in mind I rigged up a test setup on the bench and drafted my buddy’s CZC that is currently in the shop so I could test with two identical airplanes.  I tested both with the same battery and with both the APC E 15×6 and the stock PZ 15×5.5 and measured both current draw and static thrust (as best I could).  My test setup used the E-Flite current meter which is rated to handle more than 100A and my precision thrust measuring device secured to the table.  Here is picture of the setup using a harness passing through the wing tube attached to the “thrust meter”. 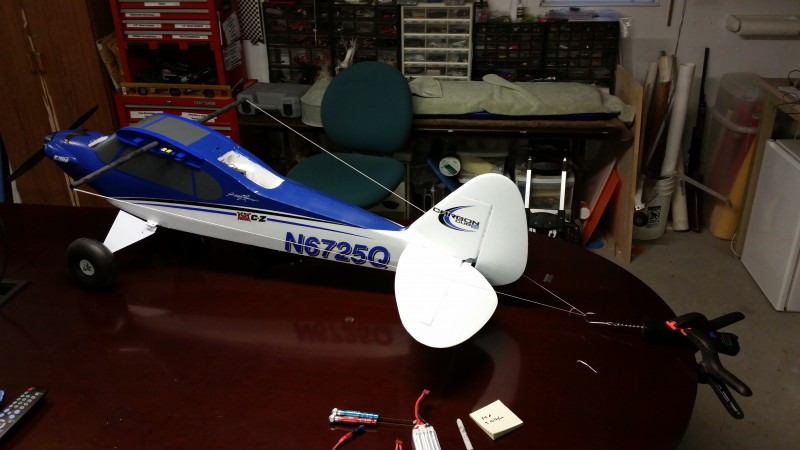 Here is the meter just showing the pack starting voltage 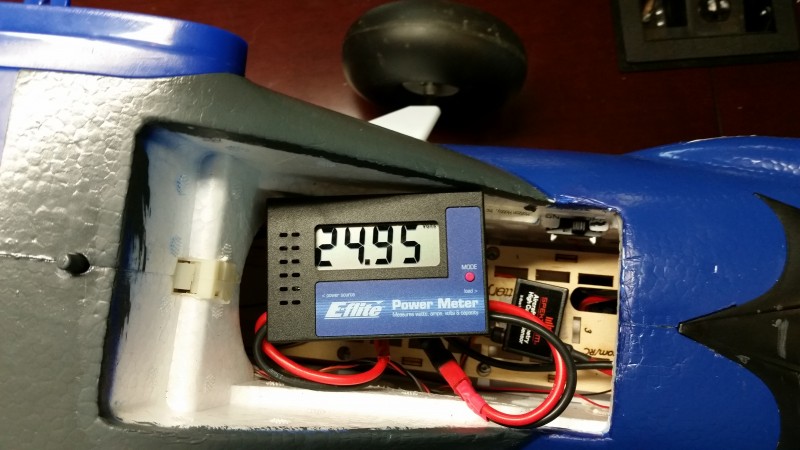 and the “Thrust measuring device”.  This has some protrusions on the back that grab the edge of the table nicely when held down by the two large spring clips. 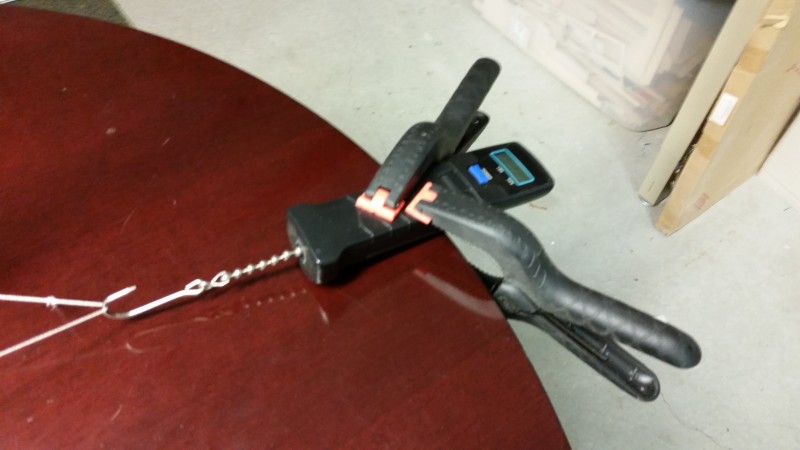 I started with a fully charged battery and only ran for 5 seconds or so at wide-open with a nice smooth run up in each case.  My wife read the digital fish scale (I mean precision thrust measuring device of course) and I manned the radio and Amp meter.  Here are my results (both planes fell within these ranges…)

Switching to the stock propeller the current measurements were as expected/previously reported from 56-63A with thrust produced 10lb 12oz and 11lb.

So as expected the 15×6 drew much more… oh, wait… not so much!!  That can’t be right… can it!  How could the APC draw less??  I tested once more with the APC a day or so later using another fresh pack and my newly installed Spektrum Telemetry High Current Sensor.  Same outcome at about 54A.

So contrary to popular “mythology” the 15×6 APC E prop did NOT draw more current than the stock 15×5.5!  In fact, in my tests it draws significantly less and would therefore be less strain on the ESC and motor of the CZC!  Of course, the prop does produce less thrust as well… as usual you don’t get something for nothing.  While these measurements are certainly counter to expectations, as previously noted you just can’t make assumptions based on mixing brands.  The difference in manufacturers blade designs, stiffness of the blade material, etc… can make hash out of those assumptions.  This really stresses the need for individual testing.  I cannot account for how different my results are from the video posted in the discussion group.  All I can do is tell you what I found.

My advice, beyond testing for yourself, is NOT to be concerned that the APC 15x6E will cause a quick demise of the motor or ESC in the Carbon-Z Cub.  Not only does that seem to be untrue but this prop may actually make such an event less likely!

I’m very anxious to do some flying with on board telemetry to measure (at least) battery voltage under load as well as current draw to see how much unloading the prop affects these static measurements as well as do some comparison flights to see how it handles with each.  Hopefully I can also correlate RPMs and temp at the battery or ESC or motor.

Update with some in-flight readings….

I have probably a dozen flights on this combination since originally posting this and in-flight amp readings via the Spectrum telemetry current probe has shown results with the APC prop that are fairly much in line with the static tests.  Here is a sample showing current measurements over the course of a 14+ minute flight (including ground time, taxi, etc…)

As you can see the current peaks at about 71 amps on one occasions and about 62 on a couple of others but averages more like 15A during most of the flight.  The speed controller on this plane should be loafing, with little or no heat buildup as is the battery (temperature shown…ambient on the day in question was about 65F).  I haven’t got any readings on temp at the motor but I am unconcerned as this point based on the light loading during 95% of the flight.  This was a pretty typical flight for me with touch and go, inverted flight, loops rolls and an occasional hard vertical or prop hang for a few seconds.  I think even doing a full on 3D flight would provide little reason for concern.

Got a few flights yesterday with the stock prop back in place and telemetry recording the current.  Ambient temp a bit warmer… 72F or so… also known as beautiful with almost zero wind.  Perfect.  Here is a sample showing current measurements over the course of a 14+ minute flight.

As you can see there are a few higher peaks with one instance where current draws hitting 80A plus for a brief instance but otherwise it looks much like the APC prop.  Flight times seem unaffected with perhaps a small increase in flight times when spinning the APC but it’s not a noticeable difference.  The only way I know is just looking at the length of the files and seeing that I averaged 30 seconds or so more per flight on the APC prop but that could be coincidence.  I’d say fly whichever one suits you… they both seem to do a great job with no concern for overheating or causing issues for the setup.