Continued the investigation tonight.  Set the body in my trusty PVC holders on workbench #1 and started examining from the front.  Pulled the cowl and found a couple minor issues… One cowl screw insert coming loose, ignition box moving a bit, but no smoking gun under the cowl.  Even pulled the plug and examined.  It actually looks like I have heard it should.  Sort of uniform dark grey.  Gap looks fine and no carbon buildup obvious.  Top of the piston still nice and shiny as well.  All linkage and tubing plus the telemetry sensors and wiring looked OK.  I then decided to skip an actual ignition spark test for the moment and moved on back into the wing saddle area.  Again nothing obvious so I turned on the plane and started looking to see if (as I thought) the ignition voltage sensing is beyond the kill.  The plane died quickly like that occurred but the telemetry didn’t show the ignition voltage loss.  This all worked as expected but it brought to mind the idea that maybe I had a throttle curve that brought the throttle below idle or some sort of misconfiguration of a mix that would cause that.  Looking at the radio yielded nothing but when I moved the throttle back and forth I saw some odd movement and looking more closely I found the culprit.  Here is the problem: 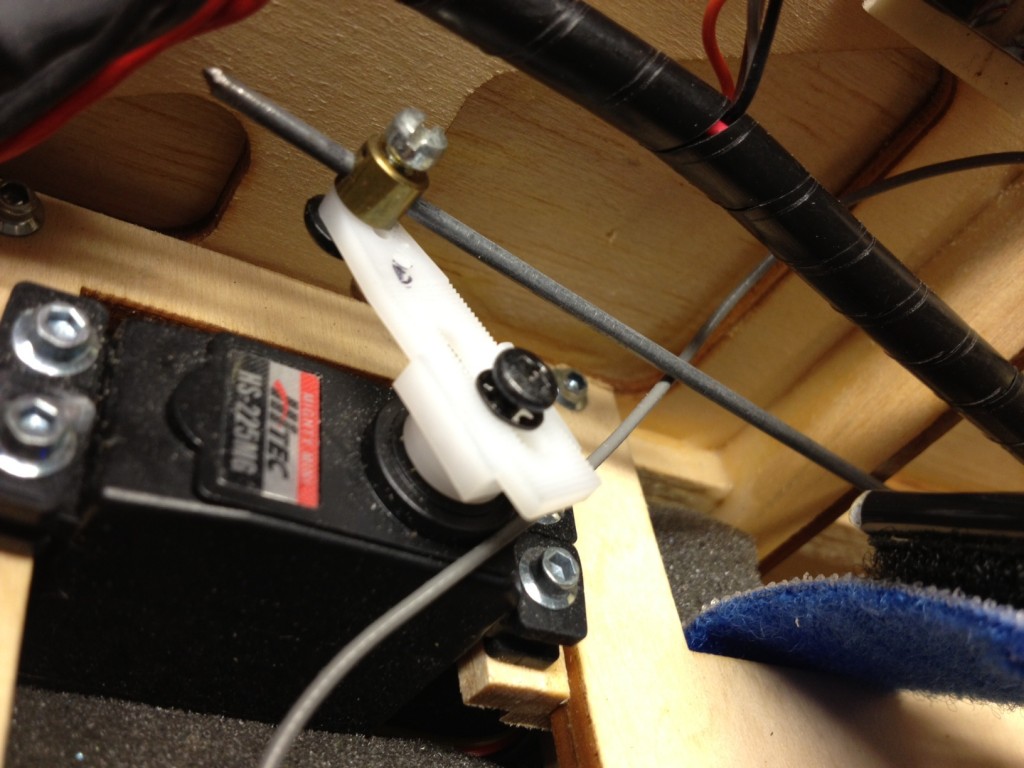 With this screw backed out this far the adjustable arm can end up extending enough to cause the throttle to bottom out and shut down the engine.  As you can guess, I will be coming up with a different type of connection.  I know, some folks will say this type of connection in a big gasser is just stupid to start with, but with so little force required to move the throttle I was not worried about torque causing slippage or the arm bending or any of that.  What I obviously should have been concerned about was vibration loosening the screw!  I will probably replace this linkage with a standard threaded clevis (once I solder on a threaded coupler) and a standard servo arm… non-adjustable this time…  A drop of something to keep the screw in place might be used as well.  Perhaps nail polish or the like.  I don’t think thread lock works on nylon!

Obviously its hard to be happy about a crash but the good news is the damage seems to be limited to my pride and the wing.  My pride will recover… its a nasty bruise but they heal.  The wing is not that difficult to replace, and not very expensive in the grand scheme of things.  The better news is that I now know what caused the crash and it is easily rectified.  I was hating the thought of fixing all the damage and not being able to figure out a cause.  That would really make me paranoid and give me no confidence to fly the plane again.  Now I’m back to looking forward to it!